BattleBots, a competition where fighting robots fight in a cage for everyone's amusement, has recently made its return to prime time television. Featured on ABC in America, the show attracts some of the biggest robot and remote control makers around. Teams line up to test and build some of the most deadly and tough robots around. The rules are fairly simple – the last one standing wins. Recently in one of the fights, a robot named the 'Minotaur' faced off against one called the 'Blacksmith.' The battle resulted in one of the robots bursting into flames, check out the robotic exchange below.

Taking a closer look at each robot, we can see the prime offensive and defensive weapons of each. The blacksmith uses a pneumatic hammer to inflict damage on its opponents. As a main defense, it features angled sheet metal to deflect other robots attacks. Typically the Blacksmith would be designed well, but when up against a design like the Minotaur the Blacksmith falls short.

The Minotaur is incredibly small, rugged, and agile which makes it almost impossible to crush from the Blacksmith's hammer. Not to mention the Minotaur features a high-RPM friction wheel as its main weapon which can do a lot of damage when up against the Blacksmith's defenses. In the end, the Minotaur's impressive high-RPM wheel and robust design won out in the robot battle and will live to fight another day. 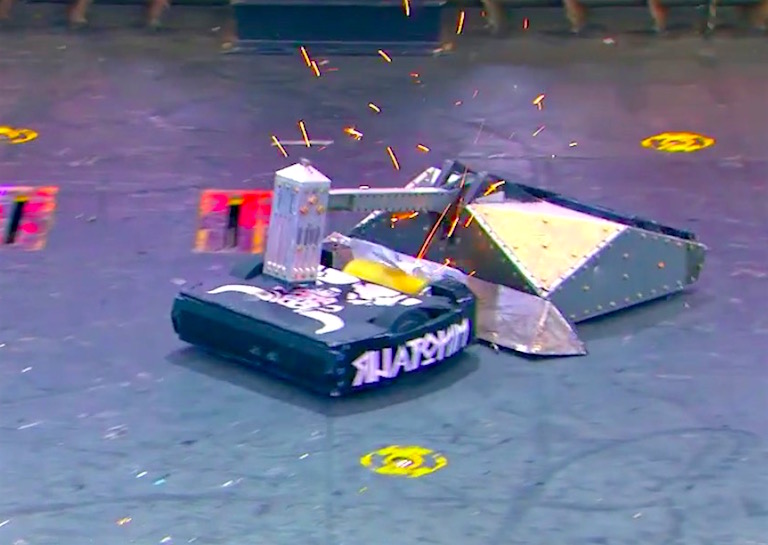 Designing one of these robots isn't all fun and games, in fact, it takes a lot of engineering and electronics skill to design machines that can stand up to beatings like this. Most of the time there are several layers of redundancy built into the mechanics and electronics to keep them fighting for as long as possible. This was perhaps one of the most epic robot battles in the history of the show, but there are new episodes on ABC every Thursday at 8/7c.