In recent years we have seen a number of tragic disasters where ships lose their stability and flips upside down. The Costa Concordia disaster in January 2012 saw the loss of 32 lives after deviating from its planned route and contacting the sea floor. More recently in April 2014 we saw the sinking of the MV Sewol in South Korea with 293 deaths, mostly secondary school children. And it's not just human lives at stake as oil spillages can be devastating to the environment. Now, there may be hope for future prevention with the SuSy project - Surfacing System for Ship Recovery.

The SuSy project is an EU-funded investigation into methods of keeping merchant ships upright on the surface in times of buoy damage or other stability destroying issues. They have looked into an airbag system that would deploy airbags during times of distress that would help keep the vessel afloat and what's more, they have turned the idea into a proof of concept.

In order for such a system to be effective, it needs to be large enough to support the ship in times of danger and also must be able to be deployed rapidly, such that the ship does not topple to a point of no return. The proof of concept was demonstrated in 2013 on a model bottom of a medium-sized tanker in the port of Chalkida, in Greece. “Our challenge was to produce enormous amounts of gas from small cartridges which is quickly released into inflatables,” describes project partner Reinhard Ahlers, managing director of Balance in Germany. 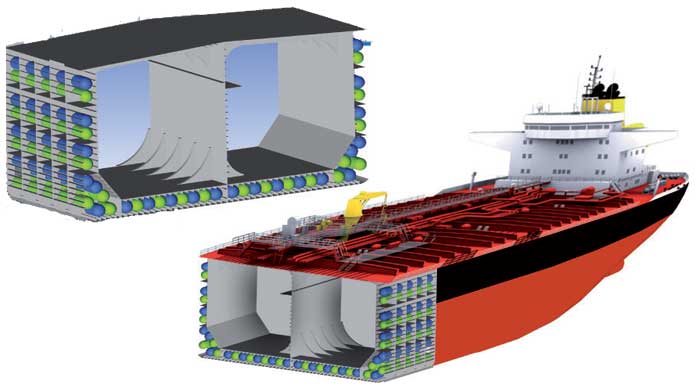 The methodology of the project was a combination of two technologies. The first is the rescue system used in submarines that uses liquid or solid fuel to blow water out of the ballast tanks in a very short time to provide additional buoyancy. The second is the use of air pressure systems with inflatable Kevlar reinforced balloons.

The project looked into and proved two setups, the first having the balloons sandwiched between two hulls and the second having external balloons, however one expert voiced concern at the project’s double hull approach. “Given the location of balloons in the double hull, not only will the construction of the ship be much more difficult and costly. But inspection and maintenance will be almost impossible – hence these systems will be unreliable,” says Egbert Ypma, researcher at the Maritime Research Institute Netherlands in Wageningen, in the Netherlands.

The balloons hold potassium nitrate (used in gunpowder), an epoxy resin and ferric oxide commonly known as rust. The gunpowder oxidises the epoxy resin which produces a gas that consequently inflates the balloons; the rust acts as a catalyst. As the blast is so rapid a lot of heat is generated and to prevent any damage to the balloons, either ambient air can be mixed into the balloon using a secondary cannister or a heat exchanger can be used just before the gases enter the balloon.

The project says that although a proof of concept has been made the project is still far from seeing fruition and there is a lot of work to go to optimise the inflation and location of the balloons. But with such disasters as mentioned before, we eagerly await an additional level of marine safety.
Also check out the full pdf report [here]

Sinking of HMS Birkenhead: The Origin of "Woman and Children First"