Fidget spinners, which became popular last year, could pose a risk for kids who can easily access the batteries powering the toy’s LED lights.

Fidget spinners are among the products sold in the European Union that pose a health risk, according to a report by the European Commission.

The product was on the European Commission's RAPEX rapid alert system, used by member states’ governments to identify and remove dangerous products from the market.

European Commission said that since fidget spinners usually come fitted with battery-powered LED lights, children can easily access the batteries and swallow them.

The toy has a three-pronged contraption and a central circular bearing which can be balanced on the thumb. It can be spun on one hand or tossed from one hand to the other.

European Commission's RAPEX- Rapid Alert System included 11 models of fidget spinner marked in 2017 and removed from the market for not complying with EU toy safety rules.

The EU Commission has specifically identified the light-up fidget spinners that contain button batteries which can be easily removed.

“If the battery in these fidget spinners are swallowed, they can cause burns to the esophagus and intestines,” the report said. The central cover can also be easily removed and this could cause choking if swallowed.

“A number of concerns have been raised due to accidents involving small children, who have either swallowed broken parts of the toy or ingested button batteries.”

“A number of concerns have been raised due to accidents involving small children, who have either swallowed broken parts of the toy or ingested button batteries,” the report said. “Consequently, dangerous fidget spinners have been tracked down, stopped at borders and ports, or destroyed.”

The toy’s fans said that the fidget spinners helped with stress relief. They were also claimed to help concentration and reduce anxiety.

The commission publishes each year a report on dangerous products that are to be banned, withdrawn or recalled within the EU's single market. This list varies from toys, clothing, and cosmetics to professional machinery and vehicles.

Usually, the most commonly flagged goods are toys, which are often identified as having small parts that young children can choke on, have dangerous chemicals or come in plastic packaging that can pose a suffocation risk.

The EU’s rapid alert system managed to stop the distribution of 201 dangerous products in 2017, with toys taking the top spot at 29 percent, with motor vehicles following behind, accounting for 20 percent.

Imports from China are usually on the list of dangerous items. At the moment this country forms the EU's largest supplier of goods. In 2017, 53 percent of identified products came from China and Hong Kong.

On the other hand, 26 percent were of EU origin. It was also revealed that astronauts have smuggled fidget spinners onto the International Space Station (ISS). But in space, they do not function the same way they do on Earth. 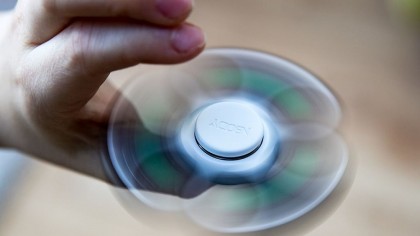 10 Weird Things You Can Do with Fidget Spinners

The low gravity conditions in the ISS means that when the astronauts release the toy, it floats around but continues to spin without losing speed. It has been explained that “allowing the fidget spinner to float reduces the bearing friction by permitting the rate of the central ring and outer spinner to equalize, and the whole thing spins as a unit.”

So theoretically, it will stop spinning eventually, due to the lower friction and air pressure but that may take a long time to happen.