The EU will trial a new border security system that uses your webcam to detect deception.

By  Jessica Miley
November 01, 2018
The EU will significantly step up border security under a new scheme called IBORDERCTRL Wikimedia Commons

The EU is increasing security on its borders by developing an ‘intelligent control system’ that will reportedly make checking the identities of travelers faster and more efficient. The EU says the new system which is being rolled out under the umbrella project IBORDERCTRL will help border guards spot illegal immigrants and assist in the prevention of crime and terrorism.

‘We’re employing existing and proven technologies – as well as novel ones – to empower border agents to increase the accuracy and efficiency of border checks,’ says project coordinator George Boultadakis of European Dynamics in Luxembourg. ‘BORDER TRL's system will collect data that will move beyond biometrics and on to biomarkers of deceit.’

New system uses a webcam to look for liars

The new system has two distinct stages, first travelers will be required to upload their passports, visas, and proof of funds to an online application centre before being questioned by a computer-animated border guard via their webcam. The guards will be uniquely programmed according to the traveler's age, ethnicity, and gender.

The robots are programmed to detect deception by analyzing the micro-expression of their subjects. Thai pre-screening step also informs potential travelers of their rights and is hope it will deter potential criminals.

The second step happens at the actual EU border, travelers who have been identified as low risk will go through a short re-evaluation of their information for entry, while higher-risk passengers will undergo a more detailed check. Border guards will be equipped with handheld digital devices that will allow them to cross-check travelers identity and compare facial images taken during the pre-screening to passport photos as well as their present appearance. 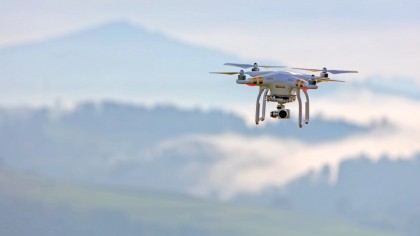 Smugglers in China Used Drones to Carry 15,000 iPhones Across the Border Each Night

Travelers will also be required to undergo fingerprinting, palm vein scanning and face matching before their potential risk is evaluated. The system was designed after extensive analysis of the existing system as well as intensive interviews with current border security staff.

Trials of the system will go ahead in Hungary, Greece, and Latvia. Initial trials will begin with lab testing to train border guards with the system, this is followed by onsite testing of the system along borders.

EU wants to send a strong message on terror

‘The global maritime and border security market is growing fast in light of the alarming terror threats and increasing terror attacks taking place on European Union soil, and the migration crisis,” says Boultadakis. In 2015 large numbers of people attempted to cross into the EU from the Middle East many of these were people escaping violence in Syria.

The emergency situated created tension within the EU about which countries had responsibility for processing the asylum seekers. European Union Country members who shared borders with non-EU countries experienced difficulty in handling the bureaucracy as thousands of people arrived.

Hungary’s Prime Minister, Viktor Orban took a heavy-handed approach that left many desperate people unable to access the EU. It is critical this new system has the flexibility to respond to travelers who may not have their official document or the ability to access the internet as they travel.