The European Commission is set to ban a range of single-use plastic items. The collection of ten items reportedly accounts for 70 percent of all garbage in the European Union’s waters and beaches.

Items considered for the ban included cutlery, straws, cotton buds, plates, some coffee cups, and stirrers. CNN reported that the ban is part of a bigger plan to move away from any single-use plastic items.

Ban will save money down the line

The report states, “The legislation is not just about banning plastic products. It also wants to make plastic producers bear the cost of waste management and cleanup efforts, and it proposes that EU states must collect 90% of single-use plastic bottles by 2025 through new recycling programs.

The European Commission estimates that these rules, once fully implemented in 2030, could cost businesses over €3 billion ($3.5 billion) per year. But they could also save consumers about €6.5 billion ($7.6 billion) per year, create 30,000 jobs, and avoid €22 billion ($25.6 billion) in environmental damage and cleanup costs.”

Despite many public and local government initiatives to recycle plastic, according to the report, only 14 percent of all plastic used globally is collected for recycling. Approximately 58% of paper is recycled while more than 90% of steel and iron products are recycled.

Alternatives to these banned plastic items will need to become available at costs that work for the market. Currently, there are many bio alternatives such as bioplastics and wood or plant-based products but in some cases, they have had trouble competing with the low-cost mass production of plastic.

Ban needs to engage all levels of government 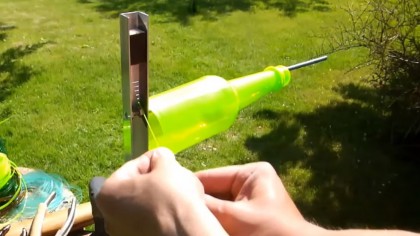 “Europeans need to act together to tackle this problem,” EU vice president Frans Timmermans told the Independent. “Today’s proposals will reduce single-use plastics on our supermarket shelves through a range of measures. We will ban some of these items, and substitute them with cleaner alternatives so people can still use their favourite products.”

Bans on similar products have had some success. In 2016, Californian’s voted to ban plastic bags which was rewarded with a drop of 72 percent in the amount of such waste found by litter collectors by the next year.

But in other parts of the world proposed bans have led to reactionary measures from plastic manufacturers who have tried to make such legislation illegal. There is an estimated 150m tonnes of plastic in the world’s oceans.

Researchers believe that more than 100,000 sea mammals die from eating or getting tangled up in plastic waste that they encounter. Cotton buds are one of the most serious offenders of this pollution as the small sticks are eaten by marine life and cause a painful death due to the plastic lodged in their cavity.