The European Commission has called for a cash injection in AI funding to stop it falling behind the US and China in AI innovation.

The European Commission has called for a €20bn injection of cash into AI research amid fears the EU is falling behind the US and China in research and innovation. Officials in Brussels want universities and institutions to focus on AI research with particular attention to applications for health, transport, and agriculture.

At the same time, the commission has backed off from ideas of giving robots the legal status of personhood. “I don’t think it will happen,” Andrus Ansip, a commission vice-president in charge of digital single-market policy told journalists. “I don’t think my vacuum cleaner has to get human rights.”

The idea was first mooted when a committee of MEPs presented a proposal for robots to have a form of electronic personhood. This would open doors for machines to be able to be sued. In response, the commision said it would form a committee to create a set of ethical guidelines on the use of artificial intelligence.

The committee will be convened by July and populated by experts from a range of fields including business, civil society, and academia. They will meet to consider the impacts of Artificial Intelligence on society, including work, social inclusion, and privacy.

The commission said it would look to have a human-centric focus on AI policy. “Robots will never become humans,” said Elżbieta Bieńkowska, the European commissioner for industry.

The EU has legitimate fears that it is falling behind the US and China in the development of AI technology. For several years the US has been poaching UK based scientists with large salaries causing a brain drain in the sector.

China is also spending large amounts of money on AI investment. Last year the State Council of China issued a policy calling for the country to become "the world's primary AI innovation center" by 2030.

It forecast by this time, China’s AI industry could be worth around $150 billion. A $2.1 billion AI technology park is set to be built in Beijing's western suburbs and other heavily backed projects are reportedly in the pipeline.

Last month French President Emmanuel Macron said it wanted to become a ‘startup nation' as he announced €1.5bn in public funding for artificial intelligence by 2022. To reach the EU’s planned €20bn target, the commission plans to increase its spending by €1.5bn in 2018-20, with funds from the EU research programme, Horizon 2020. 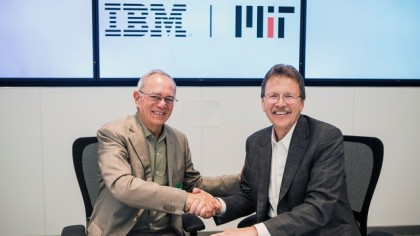 This investment is hoped to kickstart a further €2.5bn through public-private partnerships spending. The UK is among a group of 24 European countries who signed an agreement to take a European approach to artificial intelligence.

“It can ... solve key societal challenges, from sustainable healthcare to climate change and from cybersecurity to sustainable migration,” the ministerial declaration said. Despite their signature, the UK’s status on such projects is unstable due to the continuing Brexit negotiations.

The Conversation
2 days ago