Evaluating the Earthship – an Effective Sustainable Building Concept, or Not?

Earthships are green buildings constructed using a variety of recycled materials and which also use natural processes, such as solar energy, rainwater and plants, for the various utilities such as heating, power and water.

Earthships are green buildings constructed using a variety of recycled materials and which also use natural processes, such as solar energy, rainwater, and plants, for the various utilities such as heating, power and water. For example, rainwater harvesting helps to provide water while plants absorb and treat sewage. They make use of wind energy and utilize energy efficiency and water conservation measures.

The concept evolved over thirty years from the work of architect and author Michael Reynolds, a keen supporter and advocate of ‘radically sustainable’ living and a harsh critic of the conventional architectural convention. Reynolds's building designs have often been controversial. He built his first sustainable house (the ‘Thumb House’) in 1972, the year after publishing a thesis on the subject in Architectural Record. He is also the author of five books on sustainable architecture, calling his particular approach ‘Earthship Biotecture’. The present company operates from three Earthship communities in Taos, New Mexico.

Reynolds's technique is to use everyday materials that would normally have been disposed of as ‘trash’, such as tin cans, plastic bottles and used tires (used for constructing the rear wall of the structure). For example, Thumb House used tin cans wired together to form bricks which were then mortared together and plastered, a method he patented in 1973.

Earthships are generally ‘off-grid’ structures that use solar panels and geothermal cooling and other such renewable energy technologies. Some of them have been commissioned by celebrities such as actors Dennis Weaver and Keith Carradine. However, some customers have filed lawsuits because of design flaws resulting in leaky roofs and poor climate control. This caused the State Architects Board of New Mexico to condemn his work as illegal and unsafe. However, this subsequently prompted him to begin following state and federal building codes and his architect’s license was restored in 2007. Reynolds has since given lectures on sustainable building for organizations such as the American Institute of Architects. 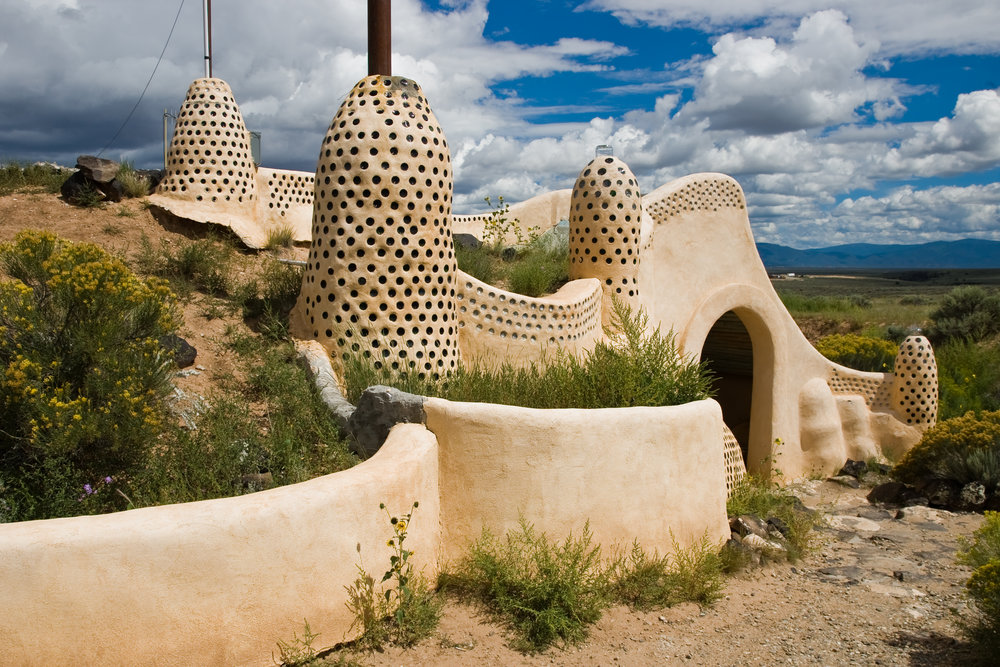 Reynolds has been promoted as a leading figure within the wider green movement, particularly with the rise of concern over global warming. He is the subject of a movie called Garbage Warrior and also appeared in Episode 5 of Stephen Fry in America (2008) and has also appeared widely in television and radio interviews.

There are a number of Earthship models presented on Earthship Biotecture’s website, but they all seem to be based on the Global Model which, so the company claims, can be modified for any climate and can be constructed in a number of different sizes, costing around $230 (£159.60) per square foot to build. While the Earthship Biotecture crew often travels to construct Earthships, the design is also available via construction drawings supplied by the company for those who want to build the structure themselves, something the company claims can cut costs by around 40 percent. Examples of this model have been constructed in a number of countries outside the US, such as The Netherlands, France, and Mexico, but in Europe, there are some pertinent questions as to how well the concept is performing.

The Earthship concept uses large, south-facing windows which are angled in order to collect sunlight and heat with a thermal mass at the rear, constructed from used car tires and pounded earth. The building also incorporates solar panels for electricity generation and cisterns for harvesting rain and snowmelt, which is subsequently filtered for drinking water. A variation of the Global Model is the Vaulted Global model and at a more basic level is the Simple Survival model evolved from a basic design constructed by the company in Haiti. According to a blog written by Reynolds himself in 2013, the budget for the Haiti structure was “basically non-existent”, given that the people of Haiti are among the poorest in the world, forcing the company to work with very basic materials. The resulting structure was then absorbed into the company’s stock of Earthship designs with some adaptation. 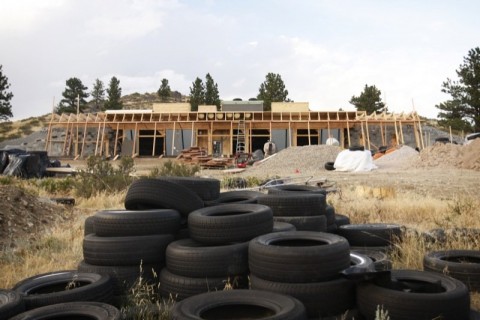 Systems commonly deployed in Earthships include rainwater and snowmelt harvesting, electricity generation, sewage systems, climate control and food production. Water collected by rainwater harvesting from a portable roof surface can be heated by biomass and/or solar thermal systems or natural gas with municipal water supplies as a backup. The rainwater is channeled into cisterns and then further directed into a water module equipped with a pump and a filter, the pump pushing the water into a tank to provide water pressure and the filter cleaning the water for drinking and washing.

Electricity generation is usually done via solar PV and/or wind power supported by battery energy storage while sewage is treated in indoor and outdoor treatment cells with toilets using treated grey water for flushing. The interior climate of the Earthship is regulated by heating via the sun through angled windows, with the heat energy being stored in the earth mass at the rear of the house. Screening the sun provides cooling.

The first Earthship in Europe was constructed by Reynolds at Strombeek in Belgium in 2000, after earlier plans to build one at Boingt had been vetoed by the town Mayor. Consequently, the Strombeek Earthship was built in a backyard as a demonstration model. Climate change consultancy CLEVEL subsequently invited Reynolds to the UK, thus initiating plans for the Brighton Earthship. Other projects followed in France and The Netherlands. The first Earthship in the UK was constructed in 2004 at Kinghorn Loch in Fife, Scotland, by the SCI charity with the Brighton Earthship established the following year. The Brighton project was preceded by a six-month feasibility study funded by the UK Environment Agency and the Energy Savings Trust. Thereafter, plans for 16 one, two and three bedroom Earthship homes were approved for the site, with a sale price of £250,000 to £400,000. Other Earthships are being, or have been, constructed in Portugal, Spain, France, Belgium, The Netherlands, United Kingdom, Sweden, Denmark, Germany, Estonia and the Czech Republic.

Earthship itself organizes tours and classes for visitors to learn more about how this all works and Earthship projects in Europe, particularly in Brighton, have also been established to further evaluate and promote the concept.

In the UK, the Low Carbon Trust decided to build an Earthship in Brighton, the first to be constructed in England. The building is used as a community center for Stanmer Organics and is located on a site accredited by the Soil Association. The project embraced several aims, including the provision of jobs for local construction workers, acting as a demonstration of cutting-edge green building and to inspire people to take action to counter climate change, both at home and at work.

The building is based on five core principles, specifically, the use of low-impact materials; passive solar design; renewable energy; rainwater harvesting and using plants to treat water. Following Reynolds design, the walls are constructed from car tires, over 48 million of which are disposed of each year in the UK, and rammed earth. This creates a thermal mass which is important for the climate regulation of the building. The tire structure is finally rendered with mud, adobe or cement. Another technique is to use glass bottles taped together to form bricks.

The orientation of the building to the south, in addition to the thermal mass formed by the walls, aids climate regulation. The glass windows are angled for maximum heat gain. The thermal qualities of the design have been evaluated by the University of Brighton, although at a time when the building was still under construction. 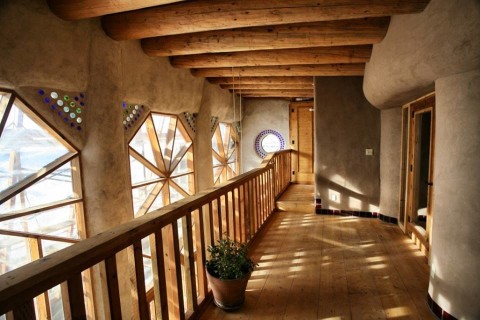 It remains to be seen just how efficient Earthships actually are, despite the ingenious concept. There are remaining questions as to how well the concept can be adapted to European climates, given that some of the Earthships in Europe do not seem to be performing as well as they should have done. For example, some of the homes are showing signs of problems with moisture and mold. This is complicated by criticisms to the effect that Reynolds seems to be reluctant to present research or figures pertaining to Earthship’s performance in different climates.

According to discussions on this matter on the Earthship Europe website, Reynolds believes that tapping into the earth’s warmth provides ‘comfort in any climate’, may be valid for New Mexico but not necessarily for Europe. Secondly, there seems to be problems with thermal bridges in the design, thermal bridges being a well-known source of moisture and mold. Other concerns relate to ventilation and the thermal mass, the latter being particularly important in more northerly European countries such as Sweden.

In Scotland, the Earthship Fife project encountered problems with the wooden roof resulting from the use of wet soil to pound the tires with. The effect was to trap a lot of moisture on the inside. This led to the evaporation of the moisture to the roof, hence the problems.

The occupants of an Earthship in Spain had to place awnings on the south side and shading over the skylights to reduce overheating in summer. They also had to adapt the grey water system to reject water from the kitchen sink, which had previously caused an unpleasant smell.

The evaluation of the Brighton Earthship by Brighton University went some way to answering these questions, but not completely. The study recommended further research on the matter as and when the project is up and running properly but initial results indicated that although the rammed earth tire wall was indeed moderating external temperatures, the design would have to be augmented by additional heating in winter and adaptions to relieve overheating in summer. The Brighton Earthships may also have to install insulated flooring and the high humidity is also a concern with regards to ventilation.

In general, although the Earthship appears to work well in New Mexico and in Southern Europe, for more northerly European climates the concept needs a fair degree of adaptation before it can be really be considered effective as a sustainable construction concept in those areas.

How upgrading buildings could dramatically boost the economy and health