Falcon Heavy rocket made history by lifting off for its maiden flight carrying a red Tesla Roadster. The test flight made Flacon Heavy the most capable and cost-effective launch vehicle.

Feb 6, 2018, will be a date SpaceX will forever cherish. This was the day when SpaceX proved to the world that it meant business, serious business! To be precise, this was the day when SpaceX successfully launched its Falcon Heavy rocket into space. Now, the Falcon Heavy is officially the world’s most powerful operational rocket. To add a cherry to the topping, the rocket uses three reusable rocket engines, making the spaceflight also a lot cheaper.

Falcon Heavy is powered by three Falcon 9 rocket engines. The core engine is a robust Falcon 9 rocket with the additional two being strap-on boosters. These Falcon 9 engines are manufactured and designed by SpaceX itself, having a capability to be reused. Each Falcon 9 rocket has 9 Merlin engines.

SpaceX is a pioneer in reusable rockets or RLVs, as they have made history using the same Falcon 9 model to be the first ever successful landing of a reusable rocket in the December of 2015. The three engines combined together can propel more than 63 tons into the outer orbit. This is achieved easily as each Falcon 9 rocket has the capacity to carry 27,500 kilograms of weight itself.

Since the Falcon Heavy uses three reusable rockets, they were proposed to return to the earth after the payload gets separated from the thrusters. The three rockets where mean to land on three launch pads that had been made ready for landing. The idea was to land the two strap-on rockets on the Kennedy Air Force Station at the landing zones LZ1 and LZ2. The third or core rocket was supposed to land on SpaceX’s own ocean-based landing pad called “Of Course I Still Love You.”

On February 6th, 2018 at 3:45 pm, the Falcon heavy started rumbling its three boosters, to create a massive trust of more than 5 million pounds and lift the rocket for a historic spaceflight. This mission represented SpaceX’s first test flight meant to orbit around the sun carrying a cargo consisting of Elon Musk’s Tesla Roadster with a dummy in the passenger seat. Thankfully, the launch was blessed with clear blue skies as the rocket took off.

The launch event went as planned and the strap-on thrusters landed successfully on LZ1 and LZ2. The landing was perfectly synchronized, making a remarkable moment as the two rockets landed simultaneously on landing zones that were just 1000 yards apart from each other.

However, the same success couldn’t be carried over to the third core, as it couldn’t land successfully on the drone ship. According to Musk, the core ran out of propellant, which didn’t help the core to slow down in order to land. Instead, the core hit the waters at 300 mph, at about 100 meters away from the ship.

It was tweeted by Elon Musk himself that the burns were successful. There is no real destination to the payload as it is meant to drift over space after nearing the orbit of Mars.

The Falcon Heavy carried something very personal to Elon Musk, his personal Tesla Roadster. The car had a mannequin strapped into it named “Starman” in the driver’s seat.  To see the triumphant voyage of Starman, the car is loaded with three cameras that shoot the car and passenger while they travel through space.

Elon Musk regularly tweets about the whereabouts of Starman and his precious cherry red Tesla. You can watch the live feed to the spacecraft from Space.com.

But that is not all the car carries. It also has a plaque adorning the 6000 employees of SpaceX who actively put effort to see this project happen. Also, the car contains the science fiction trilogy of Isaac Asimov safely stored in a data storage device.

So what makes SpaceX’s launch so successful? Well, the reason to that cannot be just attributed to the rockets working as planned, but because it is a threat to the commercial space flights offered by NASA.

Printed on the circuit board of a car in deep space

NASA has been working on a heavy launch system of its own called the SLS or the Space Launch System. But, the problem with this project is that the cost per flight amounts to about 1 billion. On the contrary, SpaceX proposed that their Falcon Heavy launches will only cost about $90m. This is why Falcon Heavy is an important project in the history of spaceflights. 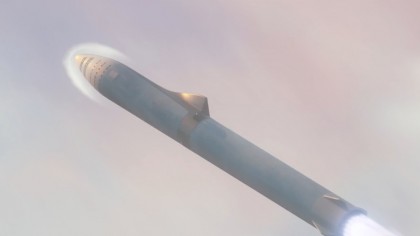 The project also signals the future of SpaceX’s vision of sending a man to Mars. Now, the Falcon Heavy is going to undertake a project for Arabsat, which involves sending a communications satellite for an operator based in Saudi Arabia. National security is also banking on the success of the demo project to start transporting national security payloads.

Another set of upcoming projects from SpaceX for the year 2018 involves satellite launches from ViaSat and Inmarsat.

SpaceX aced the launch as the payload is now on its way to Mars and then to infinity. Despite a minor glitch with the core not having a safe landing, the future of SpaceX looks bright as the sun!