If you didn't already know, modern day American cities are struggling for money. Detroit is one of the most prime examples of how a once booming city became a bankrupt wasteland. All of the budget plight across America's infrastructure began with an experiment our city planners began in the 1970s.

Many cities across America thrived for hundreds of years. They were booming metropolises filled with storefronts and people. Cities were designed the right way and allowed to grow naturally for hundreds of years, but then urban planners across America got an idea about "improving" society. It all started with the notion of urban sprawl and a model that focused itself around building infrastructure first, then open market jobs will follow. It had devastating effects for cities across the U.S., and most Americans probably have no idea. One example can be seen below. The city of Brainerd, Minnesota is pictured on the left in the early 1900s. On the right is that same street a little over 100 years later.

The picture above is duplicated across hundreds if not thousands of American cities. The common response to this plight is normally based in politics. Americans will cry foul about the opposite political party stealing money or plundering it on useless projects. Local politicians often base their platform on the downfall of American cities and how if they were only to win the election, they could turn everything around. I come to you to spread the word that this isn't a political issue. In fact, there's no one person that caused this problem.

Who is to blame?

You see, in the 1970s when American engineers changed the way they looked at infrastructure, they embarked on a philosophy that has ultimately proven financially insoluble. For hundreds of years, American cities were allowed to grow naturally without government help. They were the direct result of free market economy. This practice resulted in the cities on the left of the picture above. In the 1970s, governments decided that providing subsidies to developments and building infrastructure upfront is how they now wanted to build cities. This created an interesting problem that most of us don't think about and the cities didn't realize either.

For the average American, hearing about the city undertaking a new interchange project that will bring tens of thousands of new jobs to the area probably isn't new. In fact, for many, we have been lead to believe that these projects are good things for our community. The people at Strong Towns, a nonprofit looking to reshape our infrastructure, propose that these projects are actually huge wastes of money.

Let's first look at an example. Say a developer in the US comes to a local government and says that they will build all of the houses and all of the public infrastructure in an area, i.e. roadways, water lines, sewer, etc. For a city, this sounds like an amazing deal. "You mean we get to grow and we don't even have to pay for anything?" The catch was that the city would pay for all maintenance of the roads and infrastructure down the line.

As suburban development grew in the 1970s, deals like this became common, and cities rejoiced. From an initial perspective, this deal is a money maker. For what is basically the first 25 years of a subdivision, the city doesn't have to shell out any money for maintenance and they get all of the new homeowner's tax dollars. But then everything starts needing repairs around year 25. Even if the city took all of the tax money from those houses over the course of that time period and saved it (which they don't), it still wouldn't cover the cost to repair the roadways and infrastructure in such a development. It's a deal that gave the appearance of wealth to the city at first but was actually a deal riddled with long-term debt. An example of this can be seen in the image below: 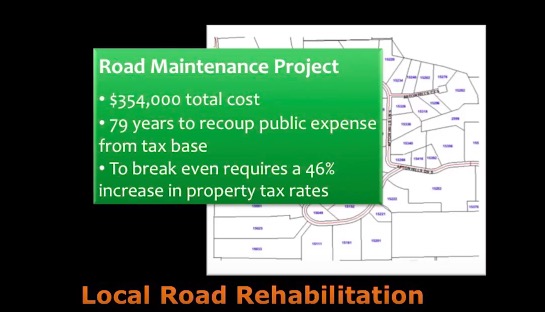 This subdivision project above is an actual example from a town repairing roads for a suburban development after they reached their lifecycle. The total project cost was $354,000 for one road repair job. If you take the taxable dollars coming out of that subdivision and add them up, you find that it would take 79 years for the city to recoup the cost of that one road repair job. In this case, and in the case of arguably most other US subdivisions, the US cities are losing tons of money.

Cities didn't, and still don't just take on one of these seemingly lucrative subdivision projects. They take one on one year, one another year, and so on. It creates this exponential growth of tax wealth for about 25 years. The city feels wealthy, they are saving money. What happens when that infrastructure starts to crumble one after another after another is represented in the following graph. Money looks good for a while, but then the city plummets further and further into debt. It's a cycle repeated throughout virtually every modern day American city. 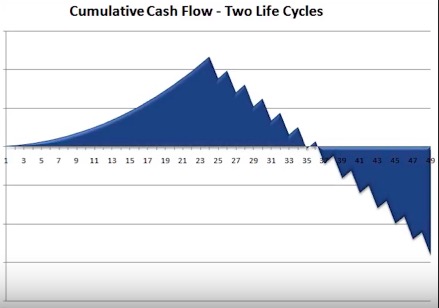 The argument often made for this is that as we build subdivisions, cities ultimately lose money, but the real money comes from commercial development. Commercial developments are arguably the most profitable aspect of most US city developments, but they only make up about 10% of the total tax revenue. To paraphrase Charles Marohn from Strong Towns, no company that has survived has taken a hit on 90% of its business and only profited from 10%. If you're familiar with the Collapse of US energy company Enron in 2005, the mentality is very similar.

So, the US began experimenting with infrastructure. Creating huge suburbs and sprawling out cities. Arguably, these spaces are pretty, they make us look rich and elegant – but they cost the American taxpayer millions. Digging deeper into the problem of American infrastructure, let's examine 2 blocks that are all too common in American development below. 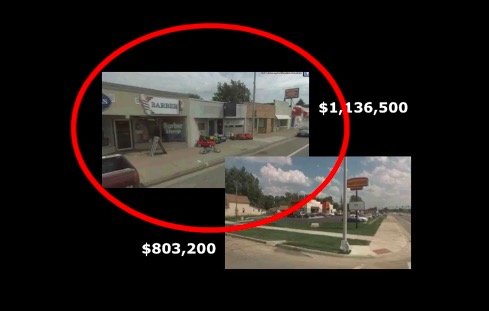 On the left is your common old run down downtown block. On the right is a new taco restaurant that looks pretty and applies to all modern code. On the left represents how cities used to be built and grow; on the right represents how modern American cities are now built and grow. Both spaces take up the same amount of acreage, but both have drastic effects on the economy. The old run down block actually generates about 25% more tax revenue than the new taco joint. To pile on top of that, the new taco joint probably got tax subsidies from the city to be built there. Not only does the city lose now in tax revenue, but if that taco joint goes out of business, the city all of the sudden has no tax revenue from the property. What happens when one business goes out of business on the old block? There are other businesses that still pay taxes.

It is this primary difference that represents why American cities are struggling. We changed how we built cities. We placed large bets on singular "pretty" businesses instead of stacking our odds across the casino. We traded wealth up front for pretty blocks and didn't examine how financially worthless that choice was. It makes much more sense to allow blocks to grow naturally, to have a conglomeration of old storefronts that eventually get better than to invest in a pretty singular taco joint. This is essentially how a mutual fund works. Small good investments that grow over time. Instead, American engineers walked into the Casino and placed all their money on red. We won for the first few rolls, but now our luck is running out. 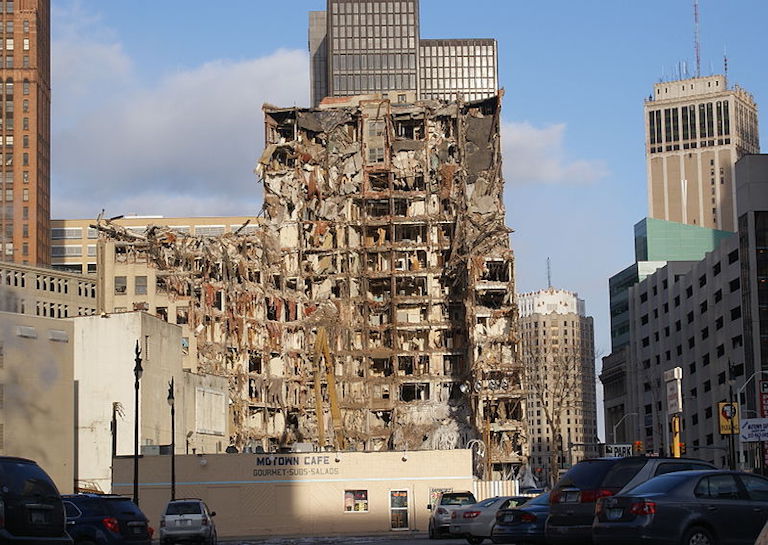 American cities are broke because we didn't stop to think about the finances of it all. We build roadways to bring jobs, but the jobs that are brought don't produce enough tax revenue to pay for the roadways. We subsidize new developments without thinking about the fact that from a revenue perspective, it doesn't make any money for the city that ultimately foots the bill. Our incorporated cities across America stopped looking at the bottom line and traded it for the illusion of up front wealth.

This conversion isn't any one person's fault. In fact, nowadays, most people think that building that new overpass or taco joint is good for jobs. We have been trained that way. However, that old rundown downtown block in your city probably makes much more money than the new fancy building on the edge of town.

If you made it this far in this incredibly long article, you probably find this topic interesting. Most of the conclusions drawn in this article are not mine, rather they are echoings of a man named Charles Marohn and a charity called Strong Towns. If you really want to learn more about this root cause of crumbling American infrastructure, the video below goes into great detail and it is well worth it. You can also check out Strong Towns at their website here.

Author's Note: For those of you that may read this and come of the opinion that I am harping on American engineers and those who embarked on this decision to change the way we build cities, I am not. I'm an American civil engineer myself – this problem is as much a result of my thinking as it is of others. We are here now, the best thing we can do now is move forward and fix it.