Workers in many industries are getting a boost from the use of exoskeletons in their daily tasks. The exoskeletons can help prevent injuries from lifting and reduce the vibrations from heavy machinery.

By  Jessica Miley
Dec 02, 2017
The Ekso vest in action Ekso via YouTube

Robotics are changing our daily lives at a startling rate. Now some of the design principles of robotics are being applied in the development of exoskeletons for humans that are helping us be safer and more efficient at work and home. We have all seen the sci-fi version of powerful suits for humans like the Iron Man or Alien. But what do real exoskeletons look like and do? Dan Kara, research director at ABI Research says: "Exoskeletons act as a bridge between fully-manual labour and robotic systems. You get the brains of people in the body of a robot. But there's more to it than that. You can tie the use of exoskeletons to business benefits that are very easy to quantify. The main one is a reduction in work-related injuries, and we know that outside the common cold, back injury is the main reason people are off work."

While manufacturing industries have been using robots for years to reduce the dangerous workload for humans, they can’t do everything. So making hybrid human-robots with exoskeletons is a game-changing idea. Marty Smets, of Ford's human systems and virtual manufacturing unit, says, "In our plants, we see a need for both people and robots.” 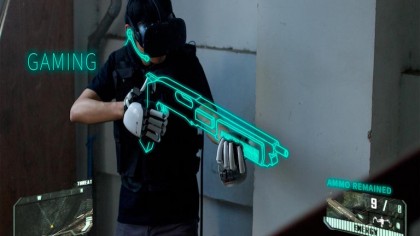 New Exoskeleton Allows You to Feel Inside VR

In some Ford plants, human workers need to lift their arms more than 4,000 times a day. This type of repetitious work can cause life-changing neck and back pain. But this type of injury might be a thing of the past as the company starts to roll out the use of the device called the Ekso Vest. The vest can reduce the strain of lifting by giving workers an extra 2.2-6.8kg of lift per arm. Paul Collins, an assembly line worker at Ford Michigan assembly plant is one of the workers trialing the device. "Incredible is the only word to describe the vest," he says, "It has made my job significantly easier and has given me more energy throughout the day” The vest has resulted in a dramatic decline in strain related injuries and there are plans to introduce the vests to more facilities in Europe and South America.

The exoskeletons we see being developed for commercial use, don’t replace human strength but rather enhance a particular skill of action. They often also don’t need to be independently powered but work by transferring weight to the ground that can result in a 10-20% boost to the user's lifting power. Japan is already using suits to assist worker lifting heavy loads in ship-building facilities and while Lowes is trialing the use of exoskeletons for truck loading. As well as assisting works with lifting, exoskeletons can reduce workers fatigue by absorbing the vibration and torque kick experienced when using heavy machinery or tools. Lockheed Martin provides its workers with its own product, the Fortis exoskeleton to assist workers. The skeleton works by transferring loads from the machinery to the floor via a series of joints at critical parts of the user's body.