New research from the University of California San Diego shows promise in boosting human memory through electrical impulses via a brain 'pacemaker.'

Unlocking the human brain has been one of neurotechnology's biggest goals in recent years. Yet another team created a brain implant to improve cognitive function, and this time, it might be the closest researchers have come yet to making these technologies available to the public.

Scientists created a brain 'pacemaker' to send electrical pulses as it struggles to store new information, but the technology doesn't operate if it notices the brain is functioning normally. This differs from other recent brain innovations which continue to function rather than constantly contributing to the brain's electrical impulses.

The technique is called deep-brain stimulation, and the findings were reported in the most recent edition of Nature Communications.

"The exciting thing about this is that, if it can be replicated and extended, then we can use the same method to figure out what features of brain activity predict good performance," said assistant professor of cognitive and data science Bradley Voytek. Voytek works at the University of California, San Diego.

The implant's research base stems from $70 million in funding support from the Department of Defense to develop treatments for soldiers suffering traumatic brain injuries.

"It's one thing to go back through your data, and find that the stimulation works," said Michael Kahana, a psychology professor from the University of Pennsylvania and the senior author of the study. "It's another to have the program run on its own and watch it work in real time. Now that the technology is out of the box, all sorts of neuro-modulation algorithms could be used in this way."

The implants did more than boost the memory of 25 people currently being treated for epilepsy. The researchers theorize that it could also assist with treating epilepsy as well.

This new technology comes shortly after the Ohio State University Wexner Medical Center released information that they developed a separate brain pacemaker. However, this pacemaker more aggressively targets Alzheimer's disease. That study was published in the Journal of Alzheimer's Disease.

"We have many memory aides, tools and pharmaceutical treatments to help Alzheimer's patients with memory, but we don't have anything to help with improving their judgments, making good decisions, or increasing their ability to selectively focus attention on the task at hand and avoid distractions. These skills are necessary in performing daily tasks such as making the bed, choosing what to eat and having meaningful socializing with friends and family," said Dr. Douglas Scharre, co-author of the study and director of the Division of Cognitive Neurology at Ohio State's Wexner Medical Center's Neurological Institute. 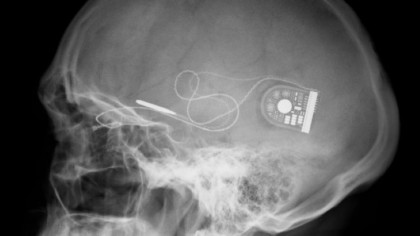 US Military is working on restoring lost memories with brain implants

As with the most recent study, the Ohio State team studied the implant's effects on the frontal lobes in order to stimulate the region of the brain most responsible for problem-solving, organizing, and good judgment.

"By stimulating this region of the brain, the Alzheimer's subjects cognitive and daily functional abilities as a whole declined more slowly than Alzheimer's patients in a matched comparison group not being treated with DBS," Scharre said.

The OSU treatment has also been tested through patient trials, most notably through a woman named LaVonne Moore. The 85-year-old from Delaware, Ohio, entered the study in 2013 and has significantly regained her independence thanks to the technology staving off her aggressive Alzheimer's disease.

Both research teams expressed that their respective technologies could greatly improve living conditions for people suffering an array of neurological issues.