Scientists have recently discovered the particles emitted from supernovas do impact the earth. The cosmic rays that hit our planet have more effects on us than you think.

Supernovas lay at the heart of our fascination with space and the great beyond. The energy that is created from a supernova is so immense that it creates ripples across space and can be seen on the opposite end of the universe, millions of light years away. Supernovas have fascinated astrophysicists for years and they have studied the effect the cosmic rays have on the areas around the violent explosion. More recently, researchers have discovered that the cosmic rays created from nearby supernovas could be having a substantial effect on the weather on Earth.

What is a Supernova?

If two stars, or binary stars, orbit each other one of the stars may steal matter from its companion star. The excess matter from the stealing star triggers a violent explosion.

Or, if a star runs out of fuel, that too will trigger an explosion. As a star begins to lose nuclear fuel at the end of its life cycle, some of its mass will flow into its core. The heavy mass causes the star to collapse in on itself triggering a supernova.

When the massive star explosion occurs there is a large discharge of cosmic rays. These same cosmic rays could be affecting the cloud formations here on planet earth. The cosmic rays generated are knocking the electrons out of the atmospheric particles on earth, which in turn, creates ionization, leading to an increased number of cloud concentration nuclei.

Researchers state, "We show that the mass-flux of small ions can constitute an important addition to the growth caused by condensation of neutral molecules. Under atmospheric conditions, the growth from ions can constitute several percents of the neutral growth." Also known as cloud seeds, these nuclei are 0.2 µm sized particles that are the bases of how all clouds are created. More clouds mean less sunshine for the people here on earth.

The researchers at the Technical University of Denmark states this new information gives us more insight into weather patterns that have existed in the past and any event that may occur in the future. 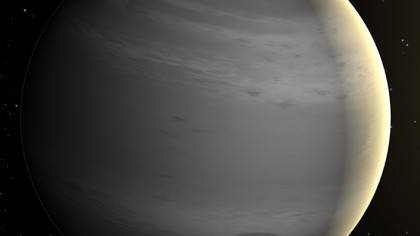 “Finally we have the last piece of the puzzle explaining how particles from space affect climate on Earth,” states Dr. Henrik Svensmark, the lead author of the study.

Even more interesting the sun seems to also play a major role in how the earth receives cosmic rays from a supernova. If the sun is magnetically active, it absorbs more of the rays, keeping most of them away from the earth.

Scientists have even gone on to speculate that this combination of the Sun's magnetic field, as well as cosmic rays, may have triggered the 2 degrees Celcius warming-cooling over the past 10,000 years.