Explore the Exotic Behavior of Materials through Two Recent Experiments

Two recent studies have shown the exotic behavior of materials, which could lead to breakthroughs in superconductivity.

The electrons in an atom or molecule can tell us a great deal of information about that element or material. For example, the atoms that make up table salt (sodium chloride) form cubic crystals because of the way the two elements share electrons.

Exotic Properties of a Material

Possibly the most sought after property of a material is superconductivity. This is where the substance has zero electrical resistance when cooled below a certain critical temperature.

Superconductivity was first discovered in mercury by Dutch physicist Heike Kamerlingh Onnes in 1911.

In general, the electrical resistance of a metallic conductor drops as the temperature is lowered, but even near absolute zero (zero kelvin, minus 459.67 degrees Fahrenheit, minus 273.15 degrees Celsius), there is some resistance. In a superconductor, the resistance drops abruptly to zero when the material is cooled below its critical temperature.

In theory, an electric current through a loop of superconducting wire which is cooled to its critical temperature can persist indefinitely without a power source.

In 2018, two independent research groups examined the behavior of electrons in a crystal by designing two-dimensional antiferromagnets. These are materials where the magnetic moments of their atoms or molecules, usually related to the spins of their electrons, align at low temperatures in a regular pattern, with neighboring spins on different sublattices pointing in opposite directions, so that it exhibits almost no gross external magnetism.

The scientists found that the electrons collectively imitated the magnetic field fluctuations of the Higgs boson. The Higgs boson is an elementary particle (in the Standard Model of particles) that is produced by the quantum excitation of the Higgs field. In a 1993 book, former Fermilab director Leon Lederman called the theoretical Higgs, "the God particle."

The field and particle are named for British physicist Peter Higgs, who in 1964 proposed the mechanism to explain why some particles have mass. The existence of the Higgs boson was confirmed in 2012 by the ATLAS and CMS collaborations at the Large Hadron Collider at CERN.

In the video below, which is the announcement of the discovery of the Higgs boson, Professor Higgs can be seen dabbing at his eyes after waiting 48 years for confirmation of his theory.

On December 10, 2013, Peter Higgs, along with François Englert, were awarded the Nobel Prize in Physics for their theoretical predictions of the Higgs boson.

To induce the electrons into behaving like Higgs bosons, the researchers bombarded the material with neutrons. The electrons' magnetic fields began to fluctuate in a way that mathematically resembled the Higgs boson.

One research group was was led by David Alan Tennant and Tao Hong at the Oak Ridge National Laboratory. The other group was led by Bernhard Keimer at the Max Planck Institute for Solid State Research. 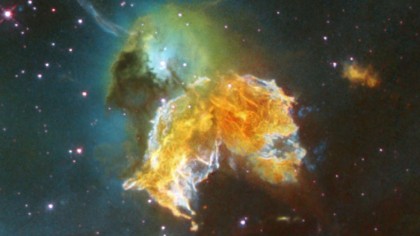 Keimer's group hopes to observe a quantum phase transition and other weird properties of matter that are associated with the Higgs mode. Speaking to Quanta Magazine, Tennant said, "Our brains don’t have a natural intuition for quantum systems. Exploring nature is full of surprises because it’s full of things we never imagined."