Explore the Inner Workings of an Airplane Lavatory

Airplane toilets have endured multiple transformations, here are some of them.

Toilets on planes have come a very long way. In the past flyers would fling excrement out of unpressurized windows or worse, use chemical toilets, which were frequently utilized during WWII by Flying Fortress or Avro Lancaster pilots. A chemical toilet is basically a bucket filled with odor-minimizing chemicals.

In 1934, the British Supermarine Stranraer flying boat was fitted with a toilet that was open to the world. If one were to lift the lid during a flight, the airflow coming through would produce a whistling noise which gave the aircraft the nickname “Whistling Sh*thouse.” See below.

Now, airplanes have a waste control technology that far surpasses its predecessors. We all know the embarrassingly obvious and deafening suction that comes with flushing 35,000ft up in the air.

There can be the assumption that our poo and wee is still being catapulted from the plane into the nether, which is wrong. Airliners have sewage tanks on-board that hold passengers waste until landing. Though the facilities work a bit differently than earth lavatories, which are called Siphon toilets.

The blue, deodorizing liquid which is usually seen in Porta-potties, was used to encourage waste from the toilet bowl to the storage tanks on-board.

Electric pumps circulated fresh fluid with each flush. This process came with numerous problems. Planes had to haul hundreds of gallons of the stuff on every flight, this added to the weight which in turn increased fuel consumption and reduced their passenger load.

Also at the time, Anotec was formaldehyde and bleach-based formula which could cause severe allergic reactions and irritations.

However, probably the most tragic aspect of Anotec was its tendency to leak. At times, these leaks would seep out of the hull of the aircraft and due to the altitude, turn into icy balls of blue liquid and excrement that would fuse themselves to the plane surface. 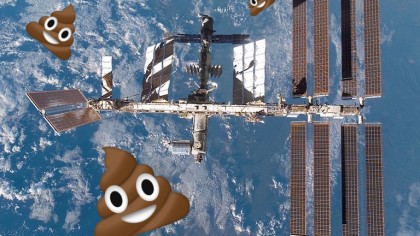 When the aircraft eventually dropped to prepare for landing, these balls would thaw and fall to earth. This became a serious issue when these toilet hailstones would destroy roofs of houses and smash through cars.

One incident even occurred in California, during 2006, when a chunk of blue ice ripped a hole into an elderly couple’s roof and destroyed a bed.

"It was a huge crash. It shook the whole building, but we thought it was a car," William McElroy told Fox News at the time.

In 1975, James Kemper patented the suction toilets we know and love today, but they didn’t become the industry standard until much later.

These toilets have powerful suction and Teflon-slick walls that seamlessly yank waste downwards using just a little bit of a gallon of water.

The flush button opens a valve which exposes waste to a pneumatic vacuum which sends the load through the aircraft’s sewer line into a 200-gallon holding tank.

Upon landing, some poor soul has to suck the waste out on the ground.

So there you have it, something to consider next time you fly.