Authorities confirm that the death of a Florida man was caused by the explosion of a vape device. The incident brings to light the lack of regulations surrounding electronic cigarettes.

This Tuesday, authorities confirmed that it was an explosion from an electronic cigarette that killed Tallmadge D'Elia in St. Petersburg, Florida, this month. The 38-year-old man was found dead by officers at his home after a fire alarm was triggered.

Reports state officials found the deceased man spotting a wound to his top lip and burns on his body. The subsequent autopsy ruled the death accidental and identified the cause as a projectile wound to the head caused by an exploding e-cigarette, according to Bill Pellan, director of investigations at the Pinellas County Medical Examiner's Office.

The autopsy also revealed the e-cigarette’s manufacturer as Philippines-based Smok-E Mountain. Since most e-cigarettes use lithium batteries, there is commonly known high risks associated with improper use of the electronics.

The US Food and Drug Administration (FDA) has a section on e-cigarette safety tips and even one for reporting explosions. “FDA is aware of explosion events and is collecting data to help address this problem,” states the site.

The Centers for Disease Control and Prevention also has a page dedicated to e-cigarette explosion dangers. "Defective e-cigarette batteries have caused fires and explosions, some of which have resulted in serious injuries," states the site.

Tampa TV station WFTS reported that a representative from Smok-E Mountain said the problem was likely an issue pertaining to the device's atomizer or battery, and not the device itself. No concrete information has been released yet on the actual cause of the device's explosion.

A lawless terrain for now

E-cigarette safety is a tricky terrain to navigate as, currently, no laws govern this security issue. The FDA launched a two-day public workshop on “Battery Safety Concerns in Electronic Nicotine Delivery Systems (ENDS)” in April of 2017 only to find that the exorbitant amount of unvetted lithium-ion batteries would require manufacturers themselves to shoulder the responsibility of protecting consumers. 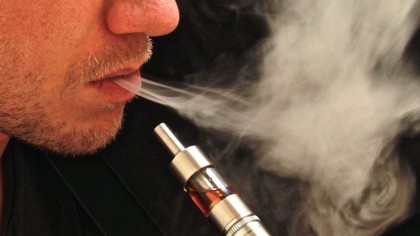 However, manufacturers may soon feel the pressure to upgrade their products' safety as lawsuits pile up. In 2013, Jennifer Ries was awarded $1.9 million when she suffered second-degree burns from an e-cigarette explosion while Los Angeles Superior Court is currently investigating 10 civil suits filed across the state by injured e-cigarette users.

However, until their safety is guaranteed, smokers reaching for e-cigarettes may want to follow the guidelines set by government bodies. These include using vape devices with added safety features, replacing wet or damaged batteries, avoiding charging overnight and using only e-cigarette chargers.

E-cigarette users are also recommended to buy their products from reliable sources and to follow the guidelines for use recommended by manufacturers. Mixing batteries and devices from different manufacturers is also discouraged.