Tech mogul and investor Yuri Milner spoke at TechCrunch's Disrupt SF conference about the importance in investing in consumer internet. He said that market will offer the most financial promise and evolution within the next 20 years.

Business tycoon, tech mogul, and physicist Yuri Milner predicted that consumer internet will be a massive booming business for the next 20 years. The Digital Sky Technologies Founder (DST) didn't once mention massive technological waves like A.I. or autonomous vehicles. Rather, he opted for a more 'everyday' technology -- consumer internet. He suggested that users will see a huge evolution in the next 20 years from what users experience today.

Milner told the crowd at TechCrunch's Disrupt SF event that he wants to craft his theories on research. He said it could be beneficial to map out precisely where the consumer sector is headed. His estimates? Well, up $1 trillion will go to the early-stage investors and early adopters, and $5 trillion would go to company founders. The rest of the boom would go to public investments, tech employees, and LPs.

Right now consumer internet consists of five large companies pointed out by Milner: Facebook, Google, Amazon, Alibaba, and Tencent. Those groups have over $3.5 trillion in value, and as TechCrunch's Matthew Lynley pointed out, it doesn't even include Apple or Google's sister companies.

Numbers aside, the consumer internet market -- even by Milner's "conservative" estimates -- will be the market to watch over the next two decades for intensive change and evolution.

But what of the rising fears of technology? What about looking to a future beyond the internet at our fingertips? Milner offered a bit more optimism than his investor counterparts like Elon Musk or even Steve Wozniak. While Milner's ultimate focus is finding life outside of earth (as he mentioned at last year's Disrupt conference), he suggested a future that gives robots menial jobs wouldn't be a bad thing. 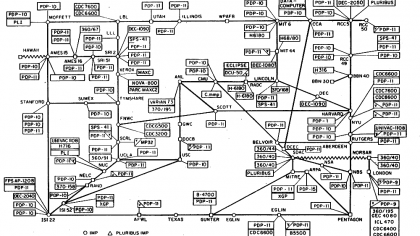 ARPANET, or How the Internet Was Born

"I share a fundamentally optimistic view on this," Milner said. "I represent a minority of all experts on this, but I think that… there are a lot of fears that a lot of jobs will get eliminated by technology. That creates a lot of uncertainty. If we look in the last few hundred years, there was a lot of technology developed. They were as disruptive as we are seeing now… What I believe will happen is that many people will just be doing different things. For example, education, we now have one teacher per maybe 30 kids, or maybe 50 in other countries, where the ratio is even more dramatic. Why wouldn’t we assume the ratio would be 1 to 10 in 20, 30 or 40 years? The same applies to taking care of old people."

Milner is one of many tech leaders to speak at Disrupt SF. This year's conference is now owned by telecommunications company Verizon. Over half of the 5,000 registered attendees are from outside of the United States, according to Forbes.

Looking for Love Online: the Evolution of Dating in the Internet Age

Apple to Participate in CES for First Time in 28 Years