Facebook's Aquila drone will be on full public display soon. Mark Zuckerberg initially hoped it would be part of a larger fleet of solar-powered drones.

By  Shelby Rogers
Nov 25, 2017
Aquila during its test flight over the Yuma, Arizona desert Facebook via YouTube

Facebook recently announced that it will showcase its solar-powered drone in London's Victoria & Albert Museum. The Aquila project remains one of Facebook's biggest to date, and the company hopes to bring the internet to those living in remote parts of the world.

"From the very beginning, the V&A has championed pioneering art, science, design and technology," said the museum's director Tristram Hunt. "Now in the midst of the digital revolution, this eagerly anticipated exhibition delves into our fast accelerating future of artificial intelligence, synthetic biology and space exploration. The V&A is taking live experiments about our future society from the studio and lab into the museum."

Aquila will go on display as part of a larger exhibition called The Future Starts Here. In total, more than 100 exhibits will showcase how technology, science, and art combine in order to serve the public. The exhibits will also tap into the ethical implications of technology like drones and AI -- two spheres with which Facebook is very familiar.

Aquila developed from a need to connect the 1.6 billion people who don't have access to a mobile broadband network, according to Facebook engineers Martin Luis Gomez and Andrew Cox. The project was initially supposed to include a full fleet of drones to be dispersed to regions around the world.

"Once they are fully operational, these high-altitude planes will stay airborne for up to 90 days at a time and beam broadband coverage to a 60-mile-wide area on the ground, helping to open the opportunities of the internet to people in underconnected regions," Gomez and Cox wrote.

Last year, Facebook finished its first successful flight of the drone in the skies of Yuma, Arizona. The first flight was only supposed to last 30 minutes, but the team had such confidence in the drone that they kept it airborne for 96 minutes, according to Facebook CEO Mark Zuckerberg.

"Eventually, our goal is to have a fleet of Aquilas flying together at 60,000 feet, communicating with each other with lasers and staying aloft for months at a time -- something that's never been done before," Zuckerberg wrote in a post. 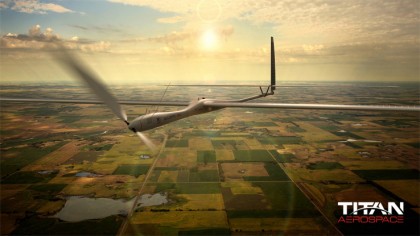 Aquila was engineered to have the absolute minimum mass needed to be functional. Thus, it doesn't have takeoff or landing gear. During testing, the team had to strap it to a dolly and get the dolly to a takeoff speed. From there, the autopilot kicks in to get it higher in the air.

The biggest challenges for the project, according to the Facebook team, included making sure the drone got enough sun to operate for a 24-hour period. Its nighttime cruising altitude of 60,000 ft requires 5,000 W of power (as much as three hair dryers, Facebook said). The drone additionally had to account for shortened sun exposure during the winter months. Cold weather also led to challenges with Aquila's batteries. Batteries are such an important piece of the puzzle that batteries make up half of Aquila's overall mass.

These challenges (and successes) will be on full display when the drone comes to the V&A on May 2018.

Via: City AM, Business Insider