Fact or Science Fiction: How Accurate Are Some of Hollywood’s Most Iconic Sci-Fi Films?

It is time to take a look back at some of your favorite sci-fi films and explore the science driving the stories.

Marion Bradley described this perfectly stating, “Science fiction encourages us to explore... all the futures, good and bad, that the human mind can envision.”

If anything, your favorite sci-fi films show you how technology could shape the world, at times painting a moody and grim portrait of society. Yet, looking through an optimist’s camera lens, these same films can highlight how new technology can preserve and even push forward some of the best sides of humanity.

So, it begs the question, how realistic are some of the stuff in some of your favorite films? 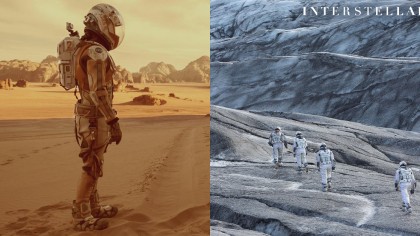 Today you are going to take a quick dive into some of your favorite films exploring the accuracy of Hollywood’s most iconic science fiction movies and the technology that they presented. With a little help from Plusnet, you are going to journey from Mars and back, to the future; exploring the most accurate films to the least.

If you ever sat and wondered if this is even possible while watching your favorite science fiction films, today is your lucky day.

Synopsis: Directed by the science fiction guru, Ridley Scott, the film follows the journey of a group of astronauts in the year 2035, on the Ares III ship mission to Mars. During their crewed mission, Astronaut Mark Watney, played by Matt Damon, is presumed dead after a Martian sandstorm forces his crew to leave him behind.

With nothing but a little faith, his mind, and technology, Watney “science’s the sh#@” out of his situation, surviving on the red planet until NASA finds a way to go back to the planet and retrieve him.

The Accuracy: The Martian was a massive moment in the scientific community as well as moviegoers. Ridley Scott worked with NASA to ensure the accuracy of the science in the film to the point the NASA was so impressed with the final result of the film that space agency has been using the movie as a marketing campaign for their own, actual human-crewed missions to Mars in the 2030s.

Everything from the use of Martian soil to grow plants to the harsh environment presented on the red planet is accurate. Even the travel time between Earth and Mars was a fact. Though some of the technology to get off the red planet is still very much in its infancy, the Martian remains to this day one of the most accurate science fiction films ever created.

Trivia: Did you know that scientists from the European Space Agency (ESA) visited the set of the Martian while the Philae lander was touching down on a comet?

Synopsis: Directed by Sam Raimi, the film follows the assault of Dr. Peyton Wilder, played by Liam Neeson, after he is beaten badly and scared after a crime boss viciously attacks him. Out for revenge, Dr. Peyton uses his scientific work with synthetic skin to take on various personas, and fight crime.

The Accuracy: Synthetic skins and organs were the focal points of the movie and if you are looking to take on a similar vigilante like role in the future, the good news is that most of the science behind the film today is very possible. In 2018, researchers from the University of Toronto created a 3D printer that can print skin.

And as of 2017, researchers have been able to easily create artificial organs. MBC Biolabs is currently leading the way in this new developing technology.

Trivia: Did you know that the creator of Astro City wrote some Darkman comics?

Synopsis: A Stanley Kubrick film, the movie is based on a short story written by Arthur C. Clarke. The space epic follows Dr. Dave Bowman and his crew on a mysterious mission. However, things go awry when the ship’s AI system, HAL, begins to go haywire, triggering a series of events through time and space.

The Accuracy: Artificial Intelligence could pose one of the biggest threats to humanity, and equally push it forward. Thought leaders like Elon Musk or the late Stephen Hawking warn of the perils of AI and its potential threat.

If anything a HAL like AI systems is very much possible today, already infiltrating all aspects of society, slowly building towards super AI.

Trivia: Did you know that the total footage shot was some 200 times the final length of the film?

Synopsis: Douglas Quaid played by Arnold Schwarzenegger dreams of visiting the colonized Mars. Set in 2084, Quaid goes to the company Rekall to experience the thrills of Mars without actually traveling there. However, the procedure goes wrong triggering a series of action-packed events.

The Accuracy: Total Recall didn't really get the depiction of a colonized Mars right. The idea of having technologically advanced civilization on Mars is still 100 years away. However, Total Recall’s depiction of autonomous vehicles is accurate; technology that has already made its way to our cities today.

Trivia: Did you know that the movie was in development for over a decade?

Synopsis: Her follows Theodore, a man looking to fall back in love after a failed relationship. Set in the near future, Theodore’s loneliness triggers him to purchase a new AI operating system that develops into an intuitive and unique entity in its own right causing Theodore to fall in love with her.

The Accuracy: Again this level of AI is tricky. The creation of a highly intelligent AI that is conscious, that demonstrates emotions, and intelligence could be five years away or could be a distant fantasy. Her does a good job at painting a picture of the ultimate Siri, yet this technology is still very far off.

Trivia: Did you know that Her was shot in a blue-less color palette?

Back to the Future

Synopsis: Set in the 1980s, Marty McFly, played by Michael J Fox, is sent back to the 1950s after an experiment goes wrong. Time traveling with the legendary DeLorean and with the eccentric scientist Doc Brown, Marty must make his parents fall in love again or he will be erased from existence.

The Accuracy: This classic film touched on many technologies that are either in development or are currently on the market. Yet, the depictions of the new technologies were not the most accurate.

Let’s start with what the films get a little bit right. First off the drone used in the film were accurate, aligning the emergence of drones over the past four years. While the film also demonstrated the rise of Augmented Reality and even fingerprint payments by 2015.

However, unfortunately, the world has yet to see any flying Deloreans soaring through the skies or teenagers on hoverboards. Though both technologies are on the cusp of culture, these technologies will look very different from what was presented in the film.

Trivia: When Marty McFly was 13 or 14, he snuck into Doc's lab and wound up getting a part-time job.

Synopsis: Set in 2154, the rich live in space on an advanced space station with access to the best healthcare technology, while a majority of the population struggles to survive on a daily basis. After a work accident Max, played by Matt Damon, concocts a plan to get to Elysium to save himself from dying from his injuries.

The Accuracy: The two biggest technologies present are the space station and the medical pods that can heal anyone of just about anything. As for humans creating and colonizing luxury space stations, this process has already begun and will eventually grow into a major market.

The start-up Orion Span is currently working on the Aurora Station, the world’s first luxury hotel in space. If anything more experiences like these will become common, eventually leading to eccentric wealthy individuals living in space.

However, the film’s depiction of the future of medical technology is off. Though a promising premise, Anne Zieger of The Healthcare AI Report believes that medical technology is nowhere near creating devices that can examine a patient and offer a viable treatment autonomously. If the rich have something like this laying around, no one has shared it with us yet.

Trivia: The set for 2154 Los Angeles was the second largest garbage dump in the world.

Synopsis: A detective thriller set in 2054, John Anderton and his fellow law enforcement team use psychic technology to arrest and convict murderers before they commit their crime. Things go awry when Anderton himself is accused of committing a future crime.

Accuracy: You do not have to worry about a pre-crime unit busting down your door tonight for a future crime you might commit. There is no indication of this type of technology ever coming to pass anytime soon.

However, the coolest and most memorable aspect of Minority Report is the gesture control computing. This is the future and there are plenty of examples of this technology coming to fruition as designers and engineers rethink computing UI.

Though it probably will not be a major part of your daily life this year. Gestured controlled computing is here and will continue to advance itself into the way you work in the coming years, perhaps even manifesting itself in both AR and VR technology.

Trivia: This film was originally intended to be a sequel to the previously mentioned Total Recall.

Synopsis: A programmer at a major technology company, Caleb Smith gets the opportunity to spend a week at his CEO’s private estate to be the human component in a Turing test to determine the capabilities and consciousness of Ava, a beautiful robot. Things begin to go wrong during the experiment as Ava manipulates Caleb.

Accuracy: If you are worried about falling in love with a sexy android robot, only to have it betray you, do not worry, a super intelligent android is still an idea that will not become a reality anytime soon.

The technology to create an android is available; however, Artificial Intelligence is nowhere near demonstrating Ava’s level of depth or self-awareness, let alone appearance. There is still a long way to go. However, you could always try talking to Sofia.

Trivia: When Caleb sits down at Nathan’s computer and begins coding, the code he types is for an algorithm called the “Sieve of Eratosthenes,” an algorithm for finding prime numbers.

Synopsis: Detective Deckard played by Harrison Ford, takes the old reigns of his job as a hunter of Replicants, a genetically engineered or artificial being created as an exact replica of a particular human being. However, his mission gets complicated when he falls in love with a replicant girl.

Accuracy: The job of Replicant Hunter will not be appearing on Monster.com anytime soon. As mentioned many times before on the list, creating an AI humanoid that is indistinguishable from a human is just not in the cards at the moment.

As stated by Peter Scott of Human Cusp, “Blade Runner depicts an android so convincingly human that I can't even tell that it isn't human itself. This requires a level of biophysical engineering that is far beyond anything currently predicted”.

Trivia: The fictional language of Cityspeak was created by Edward James Olmos just for this film.