Faraday Future Shows Off in Debut to Rival Tesla

Look out, Tesla. Faraday Future debuted its FF 91 and it's impressive. The car very casually backed itself into a parking spot at this year's Consumer Electronics Show.

In the full reveal, the FF 91 comes with an impressive set of specs. Originally teased in 2015, the FF 91 boasted an app-based system. The Chinese-backed startup caused a lot of discussion in the auto industry, especially after four out of five Faraday Future executives had recently served as directors at Tesla Motors. 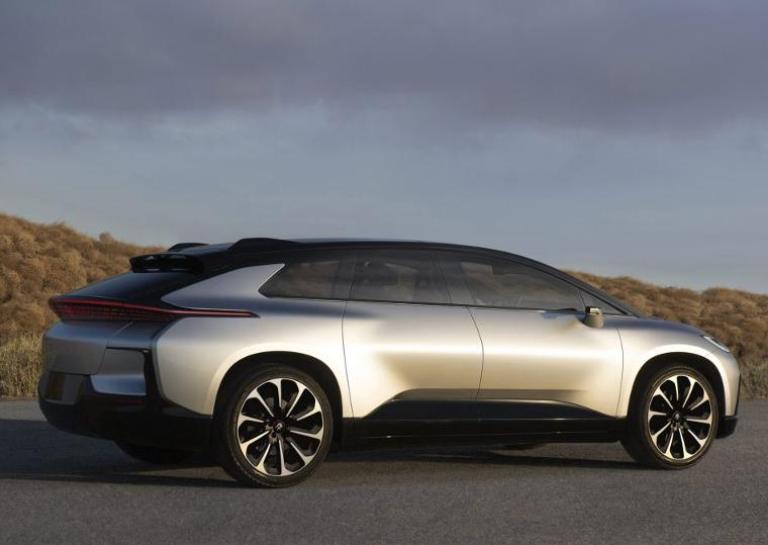 Hong Dae, Faraday Future Director of ADAS and Self-Driving, introduced the self-driving feature. The car gets alerted to self-park via the app. Sensors accumulate the data into a mainframe, one that Dae said is the most powerful computing mainframe in any automobile developed to date.

The parking job itself seems a bit more elaborate than just whipping into a parking spot with ease. The car pulls up, makes two quarter turns, and very slowly creeps back into the parking spot.

Around the 1:12:14 mark, the car doesn't respond after being put into the valet setting. It just stays still. A convention stage is a far cry from the road; however, the glitch is definitely awkward on stage.

The FF 91's battery comes with 130-kilowatt hours of electricity. It can accelerate from 0 to 60 mph in less than 2.40 seconds, according to the company. The car puts out 1,050 horsepower, and those stats make it faster than any other electric vehicle on the market. Peter Savigan, VP of propulsion engineering, said the FF 91 "can achieve in excess of 375 miles." "You can go from LA to Silicon  Valley with miles to spare," he said.

Faraday Future stopped construction on its facility last year as the company couldn't pay the construction firm. The company hopes to continue building the plant in 2018.

Faraday Future notes that competition with Tesla isn't what they intend. In a response to a YouTube comment, the company said:

"We aren’t focused on potential competition at this time...Both consumers and the automotive industry, in general, will benefit by having more players helping to push electric vehicle technology forward..."

However, there seems to be an air of comparison to the Elon-Musk-shaped figure in the room. Faraday Future has been wary of the comparisons since they launched. It's something they address (either directly or inadvertently) in seemingly every interview. In a 2015 interview with Road and Track, R&D head Nick Sampson said:

"It's Faraday and Tesla versus the entire motor industry. Why would I think that Tesla is a competitor?...

Did Daimler and Ford think they were fighting against each other, or were they both trying to replace the horse? We're both trying to bring cleaner, better products to the market, and sure, some people will compare us. But I'm more interested in what the rest of the industry is doing, how fast or slow they may be reacting."

Interested parties can reserve a FF 91 online with a $5,000 deposit. The company has yet to provide pricing. However, estimates are currently ranging around the $180,000 or more.