Many car enthusiasts receive a rush as they bolt down a track at high speed.

However, traveling over 1,200 km/h exceeds the courage of even the most daring of drivers.

The current land-speed record has been held strong for nearly 20 years. Andy Green (UK) set the record on 15 October 1997 in the Black Rock Desert, Nevada, USA, in Thrust SSC.

The first to break the sound barrier

The car is not only the fastest car in the world. It's also allegedly the first car to travel faster than the speed of sound. However, a discrepancy exists that another car reported a record speed of 1,190 km/h. Although according to the Guinness World Records, "the published speed of Mach 1.0106 was not officially sanctioned by the USAF, as the Digital Instrument Radar was not calibrated or certified."

Furthermore, the team responsible for determining the speed didn't measure the speed of the car directly. Rather, they pointed the radar at a T.V screen. As a result, the record isn't recognized officially.

The engineering behind the machine

While there may be a few underlying discrepancies as to who broke the sound barrier first, the engineering that went into the supersonic cars remains a monumental accomplishment of human ingenuity. It underlines the human desire to go faster than ever before.

Exceeding speeds approaching and above Mach 1 is no easy task. While many aircraft before it achieved well over the speed of sound, no information was available on supersonic ground effect. At its top speed of 1,227 km/h, everything around the vehicle becomes a projectile, threatening to destroy the craft if given the slightest opportunity. At the car's maximum designed speed 1400 km/h, the dynamic pressure exceeds ¾ tonnes per square foot.

The engines responsible were two Rolls-Royce Spey 205 turbo jet engines. They produce 100,000hp between them - the same output as three naval frigates. At the rear of the craft, the temperatures exceeded more than 300 degrees Celsius with sound levels approaching 175 dB. 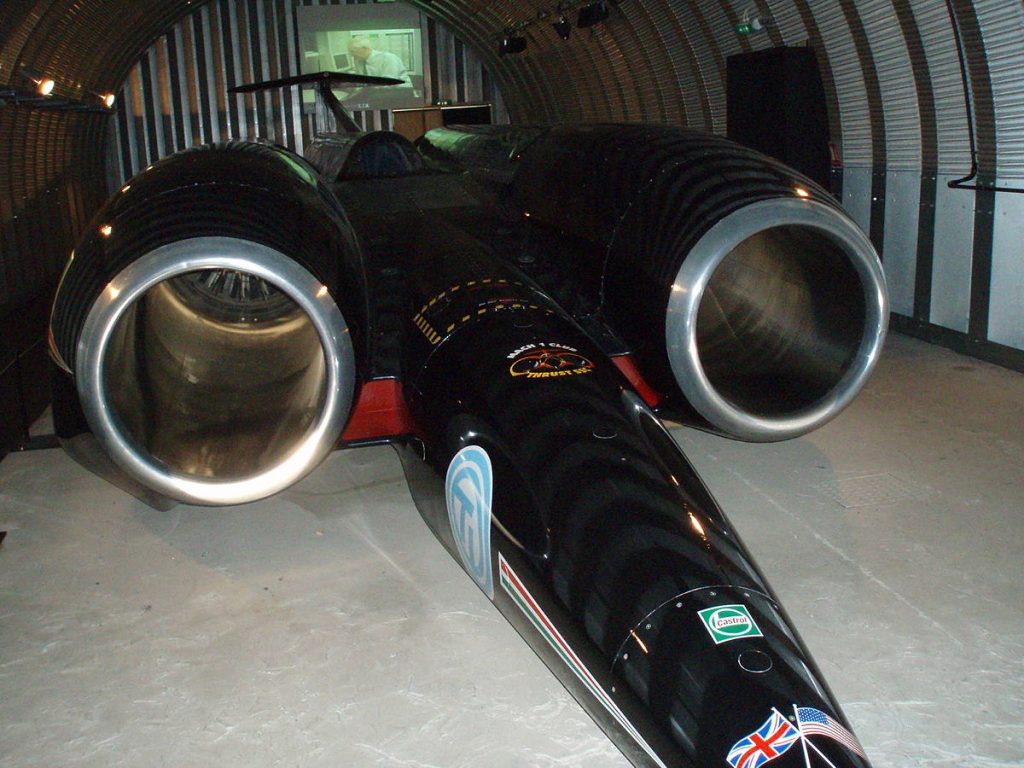 Of course, keeping the vehicle grounded is an integral part of the project to achieve the record- and keep the pilot alive. The only barrier between the body of the craft and the ground are the gigantic wheels which were to be entirely redesigned to suit the Thrust's needs.

At top speed, the wheels rotate 8,500rpm, far greater than any tire can withstand. The radial acceleration at the rim is 35,000G- speeds which would disintegrate any traditional tire. Instead, to cope with the enormous centripetal forces, L27 aluminum wheels were cast. Each one weighed in excess of 160kg.

The immense mass of the engine in combination with the mass of each wheel create enough pressure to gain traction. This allows the pilot some degree of navigation.

While safety was considered during the production phase, very little could be done to get the pilot out of harm's way with traditional systems. Fuel dumping mechanisms and even an ejection system were considered.

However, when traveling at nearly a kilometer every 3 seconds, dumping the fuel becomes redundant and ejecting would cause immediate fatality. Therefore, since there was practically no sense in installing sophisticated roll-cages, ejection systems, or nearly any other kind of safety mechanism, an emphasis was placed on keeping the vehicle on the ground and traveling in a straight path even if a failure is experienced. 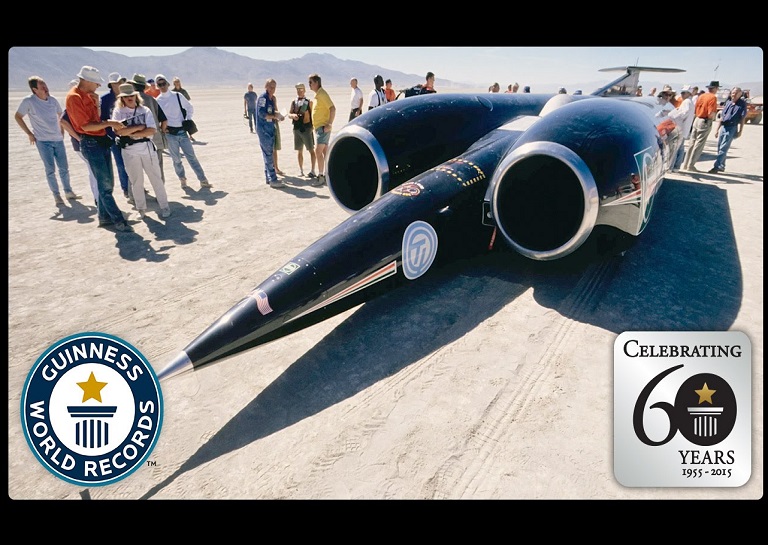 Hundreds of sensors monitored different metrics including thrust, speed, and direction. This ensured the vehicle maintained a safe path. Many systems were put into place to counteract any tangent to the expected path.

If one of the engines shut down, the sensors detect the change and in milliseconds would shut down the power of the other engine. Other sensors mounted in the suspension system measure the downforce 500 times per second to determine if the car is on the ground.

Should the other systems fail in maintaining a downward thrust, a responsible aerodynamic system was put in place to deliver three tonnes of extra downforce in just 10 milliseconds.

SEE ALSO: Ride the Most Extreme Simulator Ever Aboard the High-Speed CableRobot

The car marks a monumental achievement in engineering. It could encourage future generations to take off down the incredible road of engineering. The record for the fastest land vehicle has remained unbroken in nearly 20 years. However, many teams around the world want to build even faster cars, pushing the "limit of speed." Then again, nothing can keep humans from wanting to go faster- for science, no doubt.