Fastest Growing Black Hole Ever Has Been Discovered by Astronomers

Astronomers at the Australian National University have spotted a black hole so large it devours masses equivalent to the earth's sun every two days.

Blackholes have long fascinated astronomers. Many have even speculated that it was these marvels of space that created the universe.

Now, astronomers at the Australian National University (ANU) have announced that they discovered the fastest-growing black hole ever seen so far. The scientists say the black hole, also called a quasar, is devouring masses equivalent to our sun every two days.

"This black hole is growing so rapidly that it's shining thousands of times more brightly than an entire galaxy, due to all of the gases it sucks in daily that cause lots of friction and heat," said Christian Wolf from the ANU Research School of Astronomy and Astrophysics.

Black holes come in a variety of sizes from the minuscule to the gigantic. The smallest black holes are as small as just one atom while stellar ones have masses that reach up to 20 times more than the mass of the sun

To illustrate the size of this newly discovered stellar quasar comparatively to our galaxy, Wolf said that if the giant were to be the center of our Milky Way galaxy, it would “appear as an incredibly bright pin-point star that would almost wash out all of the stars in the sky."

A great deal of energy

Stellar black holes are created when very big stars collapse. As such, they radiate such enormous amounts of energy that scientists have considered harnessing their power in the future.

According to Wolf, the energy emitted from this gargantuan black hole was predominantly ultraviolet light. However, it also emanated so much X-ray radiation that it would have made our planet inhospitable if it was in our galaxy.

Since black holes are invisible, scientist use special tools to study the gravitational pull of quasars by analyzing the behavior of the stars and gas surrounding them. The discovery was first made through the SkyMapper telescope at the ANU Siding Spring Observatory and confirmed by the European Space Agency's Gaia satellite.

"These large and rapidly-growing blackholes are exceedingly rare, and we have been searching for them with SkyMapper for several months now. The European Space Agency's Gaia satellite, which measures tiny motions of celestial objects, helped us find this supermassive black hole," explained Wolf. 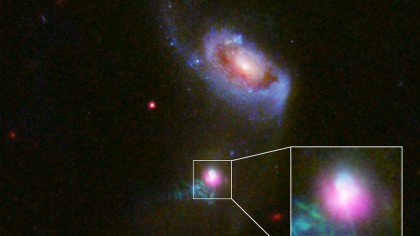 Wolf said that future technology being built over the next decade could use these super black holes to measure the expansion of the universe. He said there is currently a “hunt” for discovering these impressive black holes.

However, the team has not been able to answer the question of how the quasar earned its massive size. “We don't know how this one grew so large, so quickly in the early days of the Universe," Wolf said.