After the initial launch of the already approved 4,425 satellites, SpaceX will deploy another 7,518 closer to the ground.

The Federal Communications Commission (FCC) granted SpaceX US approval to deploy 7,518 more broadband satellites for its Starlink broadband service, complimenting the 4,425 that were approved eight months ago. 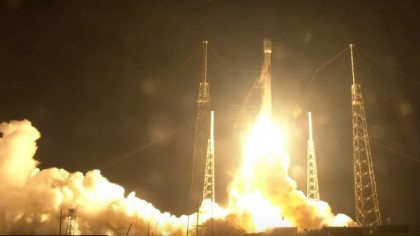 These latest satellites will operate even closer to the ground in order to tackle latency issues in heavily populated areas. In total, this means SpaceX will deploy an impressive 11,943 satellites.

The FCC said the systems "are expected to enable fixed satellite service in the United States, expanding global connectivity and advancing the goals of increasing high-speed broadband availability and competition in the marketplace."

The new very-low-Earth orbit constellation of satellites will use V-band frequencies while SpaceX will now also have permission to add the 37.5-42.0 GHz, and 47.2-50.2 GHz frequency bands to its previously authorized NGSO constellation.

"The Commission’s action provides SpaceX with additional flexibility to provide both diverse geographic coverage and the capacity to support a wide range of broadband and communications services for residential, commercial, institutional, governmental, and professional users in the United States and globally," said the FCC's statement.

The Canada-licensed Kepler system was also awarded permission to offer global connectivity for the Internet of Things using its constellation of NGSO satellites in the 10.7-12.7 GHz and 14.0-14.5 GHz frequency bands. Furthermore, the also Canada-licensed Telesat system was given a green light for high-speed, low-latency communication services in the US via its proposed constellation of NGSO satellites.

Finally, LeoSat’s 78 satellite system, which will operate under the ITU filings of France and a planned authorization from the Netherlands, was also approved. "With today’s actions, the FCC has granted 13 market access requests and satellite applications to nine companies for NGSO FSS constellations seeking authority to provide next-generation connectivity across the country in the past 18 months," said the FCC's statement.

A promise of variety

The Commission also revealed it would continue to process additional such requests. FCC Chairman Ajit Pai explained in his statement that the applications and their constellations offer the promise of introducing "variety in the burgeoning field of non-geostationary satellite services and innovative solutions to bridging the digital divide."

"From providing high-speed broadband services in remote areas to offering global connectivity to the Internet of Things through 'routers in space' for data backhaul, I'm excited to see what services these proposed constellations have to offer," Pai said.

Meanwhile, Commissioner Brendan Carr outlined that these new and advanced satellites have the capacity to offer far superior services and applications than their predecessors. "These satellites are smaller and less expensive to launch than the traditional geostationary satellites that have been going up since the 1960s," said Carr in a statement.

"They promise lower latency connections because they typically orbit only a few hundred miles above Earth, as opposed to many thousands. Many corners of our country that don’t have broadband today, or don’t have many broadband choices, could soon see new, high-speed services thanks to these low-earth orbit satellites," concluded Carr.

SpaceX’s Starship will deploy Starlink 2.0 satellites like a Pez dispenser