The FDA has approved a monthly injection that can prevent migraines. But the new drug could cost patients over $6000 USD per month.

The Food and Drug Administration (FDA) has approved a treatment that can stop a migraine before it starts. Migraines which for many people comes in the form of a throbbing headache accompanied by physical pain, light sensitivity and nausea are extremely common.

It is believed one in seven people experience regular migraines that can last from an hour up to days. Despite the commonality of the condition, until now treatment options were very minimal.

There is a class of drug known as triptans that can stop a migraine in most people but until now there were very few treatments to successfully prevent a migraine. The newly approved migraine stopping drug is known as Aimovig.

It was developed as a collaboration between big drug companies Amgen and Novartis. The patient receives a once-monthly injection that blocks the receptor that attaches to a neurotransmitter which has been identified by researchers as playing a key role in migraines.

The drug is finally available after decades of research. In the 1980s, researchers investigating migraines’ discovered the neurotransmitter known as known as the calcitonin gene related peptide (CGRP), this molecule regulates nerve communication and helps control blood vessel dilation. It was discovered that people who had migraines had more CGRP molecules than those without.

They also discovered that injecting CGRP into people who were known to get migraines, would trigger an attack. People without a history of migraines could receive the same injection without any headache response.

The initial method of creating drugs that blocked CGRP proved useless as the molecules were just too toxic. Aimovig was developed when scientists tried a new approach of using monoclonal antibodies - which are immune cells that are made by cloning the exact same cell over and over again in a lab.

These cloned cells attach to receptors on the CGRP cells’ surface, making them useless to the nerve cells. The good thing about the new treatment is that it is highly targeted and comes with very few side effects.

Not all patients will be effectively treated

However, its effects are not going to help everyone. A recent study of the drug showed that many patients experienced only a 50 percent reduction in the number of migraine instances. 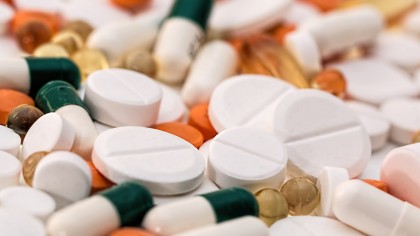 See How Painkillers Work in Your Brain and Body

Other patients deemed ‘super-responders’, experienced almost total elimination of their headaches. The other downside of the drug is the regularity and consistency required for it to have an effect.

The drug needs to be taken monthly, essentially for the rest of the patient's life. Drug trials can only test the effects of a drug on a patient for as long as the trial so new users to the drug will be guinea pigs of some sort as they start to take the drug whose long-term effects are unknown.

If you are a migraine sufferer, the new drugs will be available this week. But it isn’t cheap. One dose of the monthly injection is $575, or about $6,900 a year. However the drug companies Amgen and Novartis say they will provide assistance programs to people to reduce the cost of the drug down to as little as $5 a month.

There are strict conditions though. Speak to your doctor and health insurer for more information.