Fencing Drone can Dodge any Attack

Drones and quadcopters aren't aways the most delicate of machines, but certain tracking technologies are starting to bring their ability to maneuver into the modern age. One of the biggest problems the commercial drone industry has faced is obstacle avoidance. Having a drone deliver your package is worthless if it just runs into every object on the way there. Two researchers at Stanford university have developed an obstacle avoidance algorithm for drones, and they tested it by fencing with the little flying toy.

You'll notice in the video above that the end of the fencing sabre, lies a white ball which the sensors relay for the drone to detect and avoid. While the demonstration depicts a drone that would be useful in a sword fight, this technology is applicable to all obstacle avoidance applications. If you're interested in all of the technical facets of the obstacle technology then you can read the two researcher's paper here.

Unfortunately, this test can strictly be done in a lab for now, as the drone has no onboard sensors. Like many other drone control technologies, there is an external camera that both tracks the sabre as well as the drone and therefore makes adjustments to the quadcopter's flight. 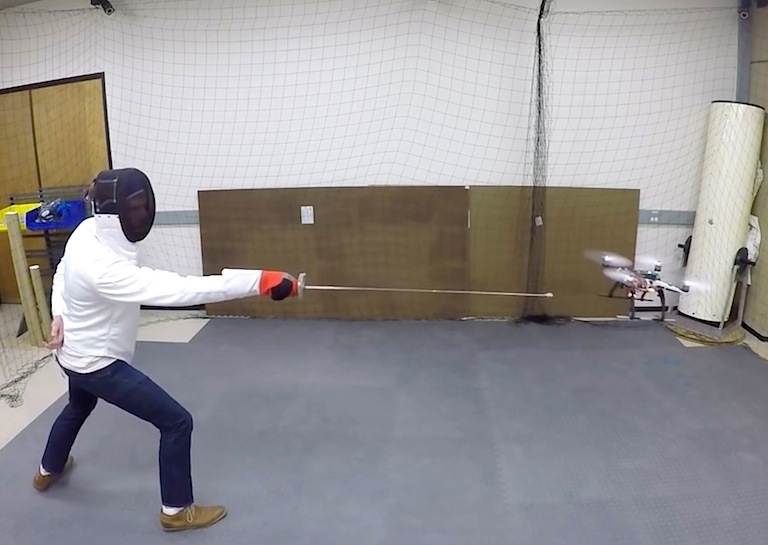 Real time autonomous obstacle avoidance technologies are perhaps the last big hurdle for drones to become largely commercially viable. If used in the shipping and transport industry, companies need to be able to assure that the package will be transported safely and efficiency. The phantom 4, as reported on by Popular Mechanics, will have optical and sonar sensors built in to allow the drone a measure of self protection from obstacles up to 15 meters away. These advances will surely help usher in the age of the drones and reshape how modern transport and business is carried out.