Festive Man Fined $232 for Adorning His Car with Christmas Lights

A Southern Californian man has been fined by police for covering his car in Christmas lights. Christmas lights have a long history and symbolize the joy of the season for many people.

One overly festive man has been fined $232 USD for adorning his car with Christmas lights. Brandon Wooden from Beaufort, South Carolina covered his sedan in blinking Christmas lights sticking them to the car with packing tape and running them from a converter inside the car. Wooden says he was pulled over twice by police before eventually being handed the fine for "improper lighting".

The first time he was pulled over, Police just wanted a photo with the yuletide lights, the second time Wooden received a warning for the possibly dangerous lighting addition and the third time he was slapped with the fine. However, Wooden’s local community rallied around the young father, setting up a Go-Fund-Me campaign and raising the necessary money to pay the fine. Wooden however, has refused to take the lights down saying he enjoys the pleasure people get from seeing him drive around in the brightly lit vehicle. In an interview with local media Wooden said: "People usually follow me for a few miles, videotape me, Snapchat, stop me and tell me to pull over on the side of the road to take a picture. I love doing it for the people. For them, not for me, for them. And my son, of course, he loves it," he explained.

The history of Christmas lights and science is closely connected. In fact, the first outdoor electric Christmas lights (separate from a tree) were installed and displayed by Thomas Edison. The inventor of the long-lasting, practical electric light bulb created the display outside his inventor's laboratory in 1880. Edison's partner in the laboratory, Edward Johnson invented the string of Christmas lights several years later.

The first string of lights consisted of 80 small electric lights bulbs in sequence. By 1890 these strings were being mass produced and available for purchase by the public in department stores. Large displays of Christmas lights put on by departments stores and government buildings became a popular practice throughout the US at the turn of the 20th century and it became a Christmas tradition for many people to tour their city looking out for these colorful displays.

As the price of the lights decreased individuals began to create displays on their own homes and gardens. These displays, generally in the suburbs consist of elaborate arrangements of Christmas lights and other seasonal decorations. Some are as intricate as timing their displays with music, others tell a specific Christmas story. 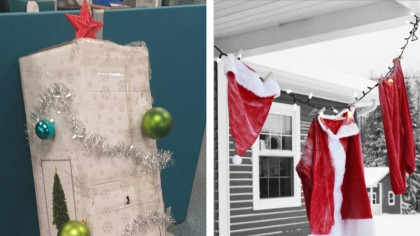 11+ of the Laziest Christmas Decoration Attempts

With the advent of solar lights, many of these displays have got even bigger and brighter, no longer hindered by a potentially crushing electricity bill. In tragic news for Christmas light fans, a well-known Canadian man has died this year after falling from his roof whilst maintaining his display. Doug Musson was well-known in his local area for his elaborate Christmas light display, installed every year for more than 30 years. But the 82-year old man died on Monday after falling from a ladder whilst inspecting a leak on the roof of his house that he was worried would make the pavement slippery for the many bystanders coming to admire his display.