The deal could save both companies money as they head into the electric future.

Fiat Chrysler (FCA) and Renault may merge according to recent reports from the industry. The news comes amid growing pressure on automakers to find ways to deal with increased regulatory pressure, sales declines and the costs required to bring self-driving cars to market.

Fiat Chrysler has sent a non-binding letter to Renault proposing a 50-50 merger. The agreement would see the combined business split between Renault and FCA shareholders. The new board would be a combined panel of 11 members, the majority of which would be independent FCA and Renault would four members each and Nissan would have a single representative.

Fiat to benefit from Europe connections

Fiat has a market value of $20 billion owning brands such as Alfa Romeo, Fiat, Lancia, and Maserati. The FCA we are familiar with today was formed when Chrysler and Fiat merged back in 2001. It currently employs about 200,000 people globally. Fiat has said no plants will close as part of the deal.

There are big advantages for Fiat who has a largely unbalanced business due to most of its employees being in Europe while most of its profits coming from the North America market. If the deal goes ahead Fiat could save a lot of money in Europe. Most of the big car makers are preparing for a loss in sales as people turn away from fossil fuel cars and potentilla cars in general as ownership models change.

The merger will allow both car companies to share costs on extensive research and development needed to enter the electric car and autonomous vehicle markets. FCA has already invested heavily in these technologies, they currently operate 46 research and development centers. Their main focus has been developing advanced driver assistance systems like its highway assist feature offered in its Maserati brand. 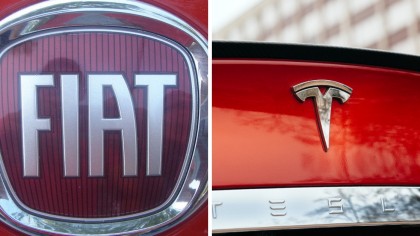 Fiat is being strategic about its costs and impact moving forward, they have even teamed up with Tesla to help avoid EU regulations around emissions. Fiat released a statement back in April saying they are cooperating with Tesla on the issue to achieve “the lowest-cost approach.”

Surprise! Renault Repurposes One of Its Retro Designs as a Flying Car