Residents of East Alabama were treated to the rare sighting of a fireball meteor.

As many of us would attest, in terms of the dazzling events that occur as result of activity in space--from meteors to solar and lunar eclipses--our geographic position often decides who sees what and when sightings happen.

The lucky audience this time is residents of the Southeast state of Alabama in the United States, where a fiery meteor was spotted. Though the meteor was travelling roughly 86,400 km/h, the 1.8m interstellar visitor left a strong impression after it was first detected 93 kilometers high in the sky above the town of Turkeytown. 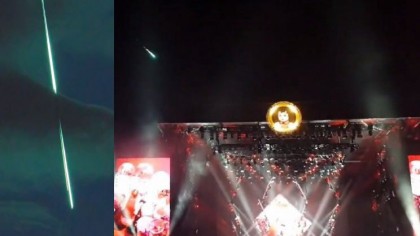 It was captured as it travelled west before it broke apart only 29 km above the eastern city of Oak Grove, Alabama. In honor of the fireball's path, it seems that a hybrid name like "Turkeygrove" might have been a nice fit.

The fleeting moments captured the attention of local residents and scientists: "We are still assessing the probability of the fireball producing meteorites on the ground," a representative wrote in a NASA Meteor Watch post.

Local meteorologist James Spann tweeted a video image capturing the brilliant meteor in motion as it streaked through the sky.

Security camera/doorbell camera video of last night's fireball over Alabama at 12:20a CT. From Jason Stricklin, Shannon Stephens, Barry Pender, and Chris Bruner. The meteor was 18 miles over East Alabama moving at 53,700 mph. It fragmented over Grove Oak, in DeKalb County. pic.twitter.com/TVhcqht0RE

"We are still assessing the probability of the fireball producing meteorites on the ground - whether it did or not, it was an extremely bright event, seen through partly cloudy skies and triggering every camera and sensor operated by the Meteoroid Environment Office in the region."

A team of enthusiastic researchers have developed a special smartphone app that can be used for capturing and reporting meteor activity. Named the Fireballs in the Sky app, it uses a combination of GPS and sensor technology that allows users to record the start and end position of a meteor sighting with a background star field as a reference.

The app is a great way to generate more interest in space science among the general public, as people report their sightings in what the designers of the app call "citizen science report". It also uses augmented reality features to assist users with choosing the optimum sight for capturing images.

Below is an image captured from a meteor sighting in Australia earlier this year:

Hey Victoria! Seems you had space rock visitor in your skies ☄️ certainly was a meteor @theheraldsun, we've had heaps of citizen science reports via our app and online ???https://t.co/ptYXhSR7MF