Filming the First Milliseconds of a Nuclear Explosion with the Rapatronic: A 1950 Engineering Marvel

This is the story of the Rapatronic - a camera able to film the first milliseconds of a nuclear explosion.

It would seem virtually impossible for anyone to produce a camera with such abilities in the early 1950's. But determined by a new era of unfathomed nuclear science, scientists would soon develop a new system to capture every passing millisecond of a nuclear explosion.

Showcased below are some of the most famous and eerie images to emerge from the Cold War.

This is the story of the Rapatronic camera -the first camera to reveal the first milliseconds of a nuclear explosion with awry and unprecedented detail.

In the wake of the nuclear blasts which devastated the Japanese cities of Hiroshima and Nagasaki, scientists were left bewildered by the monstrous creation of the United States - the atomic bombs of Little Man and Fat Boy.

But amidst the destruction arose an eager curiosity, leaving scientists to wonder, what is going on inside a nuclear explosion?

1950 cameras were still quite rudimentary as one might expect. Film cameras ran rampant, but most could only take a picture no faster than 1/300th of a second - much too slow to capture any useful information about an atomic blast.

The First Video of a Nuclear Explosion

After Japan refused an unconditional surrender, in 1945, the United States would go on to test and record the first nuclear explosion - dubbed the "Trinity Shot" at the Los Alamos Laboratory in southeastern New Mexico. It would be the first live atomic weapons test in the United States.

While certainly impressive, the video offered little insight into the inner mechanisms of what drives a nuclear explosion to reach such gross proportions.

The mechanics and nuclear science of an atomic bomb were well described and documented by the 1940's. However, what scientists lacked was a video to reveal the fundamental workings of an atomic blast moment by moment. Such a video could provide immense insight into a new side of science, impossible to appreciate from the human eye alone.

Still images had captured instantaneous moments in nuclear explosions before, but they could not take photos with rapid enough succession or with enough precision to stitch a video together sufficient enough to provide any useful insight researchers have not previously observed.

It would be Dr. Harold Edgerton who would be tasked with developing a rapatronic camera - a camera system able to take photographs at a frame rate of 10 million frames per second.

The impressibly fast shutter speed was made possible through an ingenious mechanism which could open and close a shutter seemingly instantaneously. Effectively, a coil was wrapped around a special glass cylinder. When induced with an electric current, the magnetic field created by the coils opens and closes the shutter in rapid succession (see video below). The rapid action and electronic nature of the device would lead to its name, the Rapatronic.

But it was not particularly the shutter speed - the time in which a shutter exposes a sensor to light - which prevented scientists from recording the first few milliseconds of a nuclear detonation before.

Rather, the problem arose from a lack of ability to take photos with unfathomably fast shutter speeds in rapid succession. In other words, cameras simply did not have a frame rate fast enough to capture the first milliseconds of a nuclear explosion.

The solution to a buffered frame rate would not come as an improvement to a single camera's frame rate. Instead, a rotating mirror would redirect light up to a curved film sitting above the mirror. Between each shutter actuation, the mirror would rotate slightly, enabling the next frame to be taken as quickly as 10 billionths of a second later.

"The exposures were often as short as 10 billionths of a second, and each camera could take only one photograph. As a result, banks of four to 10 cameras were set up to take sequences of photographs during a single nuclear test." According to Nevada National Security Site (NNSS).

Stitching the images together reveals the inner beauty of a destructed demon - a perception which could never be appreciated through the human eye.

Below, Charles Wyckoff, one of the developers of the Rapatronic camera, explains the technology he and Dr. Edgerton created to record ultra-slow motion video of a nuclear explosion.

Incredible Discoveries of the Rapatronic Camera

Despite its primary objective centering around measure the size of the explosion as it expanded, the Rapatronic camera lead to the discovery of a particularly interesting phenomenon. Examining the ultra-slow motion video revealed mottling of the fireball - the appearance of spots and smears of color which propagated through the fireball.

It was the first time such an effect had been observed, which lead to an intriguing discovery. According to NNSS, the initial growth of the fireball following an explosion is accelerated by radioactive transport - essentially thermal x-rays which "outpace" the actual exploding bomb debris. 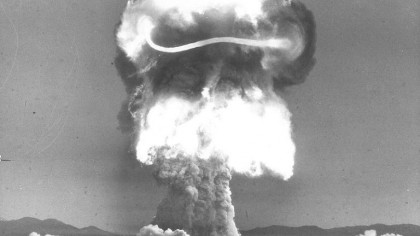 Born out of a dark time, the Rapatronic camera has still provided to be a valuable tool for scientists to use and better understand the events which immediately unfold in the milliseconds following the detonation of a nuclear bomb. And all of it would have been impossible without the ingenious efforts of Charles Wyckoff and Dr. Edgerton.