A Chinese power company developed a unique way to clean off power lines. The company, based out of Xiangyang, China, uses a fire drone to throw flames at trash stuck on power lines.

A fire drone might be the craziest way to clean up trash ever developed. Too much trash on power lines could cause shortages, but no data exists to show how frequently that happens in the Xiangyang region.

Also, no one really knows exactly what type of octocopter this is, although several media outlets speculate it's part of the DJI 1000 series. A small flamethrower appears to be attached to the underside of the drone rather than embedded into the system. 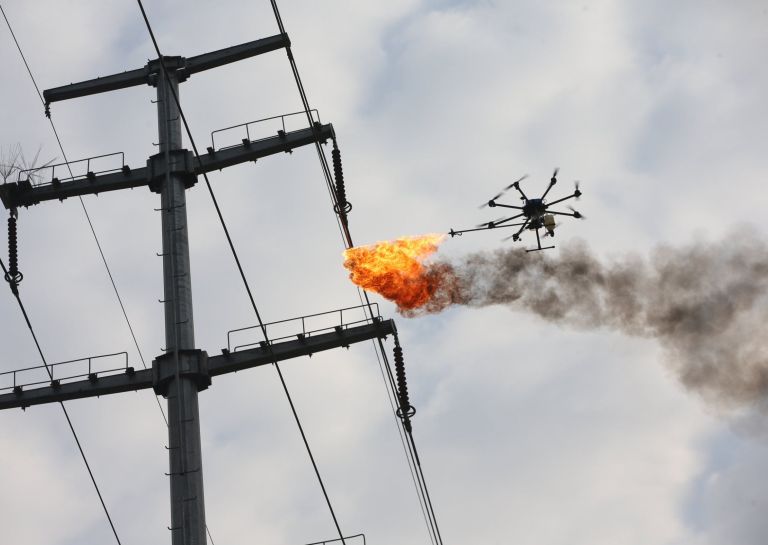 This isn't the first instance of a fire drone being used to clean up messes. In 2015, the University of Nebraska-Lincoln developed a drone to start controlled fires in grasslands. Last April, the drone team successfully burned 26 acres of tallgrass prairie in a controlled space.

Both the UNL and Chinese drones could offer a bit more safety when it comes to controlled burning. Prior to the fire drones, plastic bags would be ripped off power lines by hand thanks to a guy in a cherry picker. Linemen consistently get listed as some of the most dangerous jobs in the world, due to both the height of their job and working in high-voltage settings.

In the above video, only one man actively controls the drone. And the only other guy in a uniform-esque outfit seems to be there as another tech lest anything goes awry.

While this fire drone makes headlines, others are being developed to put fires out instead. In 2015, MIT partnered with Olin College to make a drone to help put out wildfires. The drones would venture into places too dangerous for humans or capture aerial images to help firefighters strategize.

Incinerating plastic might not be the most environmentally-friendly option, but it's certainly one of the coolest ones we've seen.