Firing a Gun in Space – What Would Happen?

Guns can fire a projectile at over 1000 meters per second, but what would happen if you fired a gun while floating in space? Well if you remember Newton's third law of motion, you will know that firing the gun will actually propel you backward due to an equal and opposite force. Now, you won't be going the same speed as the bullet because you have a different mass. After some quick calculations, you will move somewhere around .07 m/s based on the average human and depending on the type of gun fired. Beyond the study of the physics of firing a gun in space, because the ammunition contains its own oxidizer, it is actually possible to fire a gun in space. There is one problem in doing this however, you may shoot yourself in the back. Check out the video below to learn a little bit more about how it works.

Gravity is still acting on an object orbiting earth, in fact, they are still falling towards the ground, but their horizontal velocity is so large that the rate of fall is just as fast as Earth is curving away. This, of course, interpolates into a perfect orbit, and this principle isn't new, but it can be applied to the physics of firing a gun in space. If you were standing on the moon and had a gun that fired a projectile at 1600 m/s, you could, in theory, shoot yourself in the back on a very little amount of time. All you would need to do is fire at the horizon, and the bullet would travel around the moon, back to where it was originally fired.

Firing a gun in space isn't all that far-fetched as Russian cosmonauts are sent into space with a gun in case it is needed for survival after landing on earth in a treacherous region. So guns have been sent into space, and if a cosmonaut wanted to take one on a spacewalk, he or she could demonstrate the physics at play here. 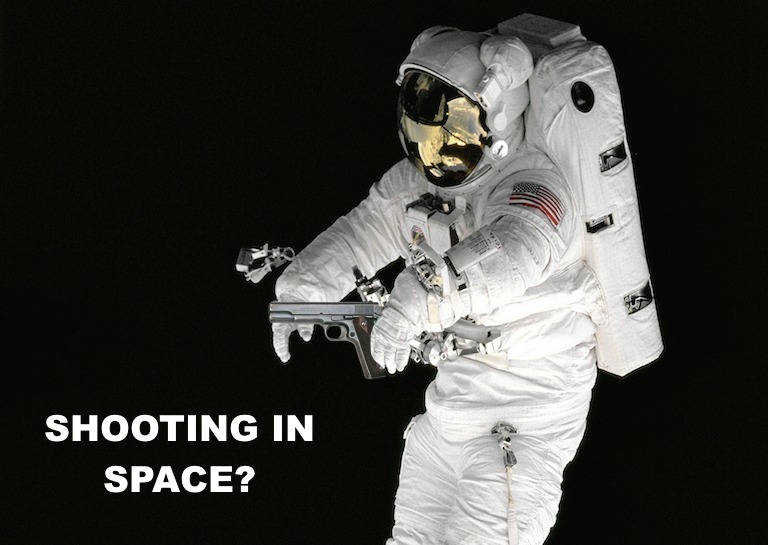 Hopefully, what you have learned here is that you should be really careful if you ever find yourself in space with a gun. The physics behind it are surprisingly simple, but the effects of firing that bullet could get you shot in the back.