A healthy baby boy has arrived in the world after his mother received a uterus transplant with robotic surgery.

A new baby in Sweden holds the very special title of being the first human born after robot-assisted uterus transplant. The baby boy was born via planned cesarean section on Monday, April 8th. He and his family are all doing great.

RELATED: FIRST EVER ROBOT-ASSISTED SPINAL SURGERY UNDERTAKEN IN US

“It’s a fantastic feeling to deliver such a special, longed-for child. To have been part of the whole process, from the first meeting with the couple to the uterus transplant, and now to see everyone’s joy when what we’ve hoped for becomes reality. It’s simply wonderful,” says Pernilla Dahm-Kähler, a leading robot-assisted surgeon and gynecologist on the team and research scientist at Sahlgrenska Academy, University of Gothenburg.

The new baby was able to be born after his mother received uterine transplantation in which the donor, the recipient’s mother, was operated on with robot-assisted keyhole surgery. The keyhole surgery is considerably less invasive than the traditional open surgery.

“This is an extremely important step towards developing the surgery involved in uterine transplantation and its safety. For the first time, we’re showing that the less invasive robot-assisted surgical technique is practicable,” says Mats Brännström, Professor of Obstetrics and Gynecology at Sahlgrenska Academy, who heads the research work.

The donor only needs to have one-centimeter incisions in the abdomen during the removal. Robotics arms are controlled by specialist surgeons who sit on either side of the donor just meters away from the surgical bed. The uterus is then immediately transplanted into the recipients via open surgery.

The researchers and doctors have high hopes that the robots may be able to assist with the recipient's surgery too. “In the future, we’re also going to be able to transplant the uterus in the recipient using robot-assisted keyhole technique,” explains Niclas Kvarnström the transplant surgeon in charge within the project.

Uterus Transplant Tech On The Rise

The recently born baby is the ninth to be born in Sweden following a uterus transplant, but the first to be born as part of “the Robot Project”. There are more babies and pregnancies expected to occur in the years ahead thanks to the robotic technology. In total in the world, there have been just 15 babies born following uterus transplants. 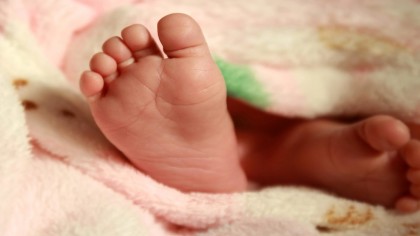 Nine of those were born in Sweden, two in the United States and one in each of Brazil, Serbia, India, and China. In December last year, scientists reported the first successful birth of a baby from a transplanted uterus from a deceased donor.

The birth mother and donor-recipient was a 32-year-old woman who was born without a uterus as a result of Mayer-Rokitansky-Küster-Hauser (MRKH) syndrome. The donor was a 42-year-old woman who died from a stroke. Several months before the transplant the recipient went through an IVF procedure and had 8 fertilized eggs frozen.

The uterus transplant took 10.5 hours to complete. If the robotic technology continues to improve it too could assist with transplants from deceased donors.