An electro-hybrid train called the Bombardier Talent 3 started its trial in southwest Germany.

The first battery-powered train in Europe for more than 60 years has taken its maiden voyage in Berlin. Re-introduced by Canadian company Bombardier, the electric-hybrid train hosted local government representative and the federal commissioner for rail transport on its first journey.

"Around 40 percent of the German rail network is not electrified," said Bombardier German transportation chief, Michael Fohrer. "The Bombardier battery-operated train is an attractive option to counter that, both economically and ecologically speaking."

The Bombardier Talent 3 was developed with $4 million worth of support from the German government. The breakthrough train uses Bombardier MITRAC powertrain that allows for various combinations of motors and batteries.

Bombardier says the version launched this week has a range of about 40 km (25 miles) on a single charge, but future versions will be able to run for up to 100 km (62 miles). Germany has big plans to wean itself off diesel trains.

Move away from diesel spreads through Europe

Other exciting train projects in the region include the Coradia iLint, from Alstom. This hydrogen-powered train is expected to have a range of about 1,000 km (620 miles) on a tank of hydrogen.

"On non-electrified or only partially electrified routes, the motto is: move away from diesel on the tracks and toward cleaner and more environmentally-friendly mobility," said Germany's state secretary for rail transport Enak Ferlemann. Germany is following the impressive lead of the Netherlands which operates its trains on 100 percent wind power.

The Bombardier prototype emits no exhaust and is 90 percent efficient. It is also wonderfully quieter than diesel trains.

The train will start a twelve-month trial run by Deutsche Bahn (DB) near Lake Constance in Germany's southwest. “We want to continue to electrify rail transport. A train that can charge its batteries from the overhead line while driving is a huge step toward this and the epitome of innovation,” the State Secretary stated. 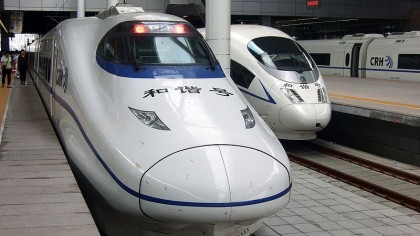 As battery technology increases the range of trains is also expected to increase. Germany is paving the way for more routes that can adapt to battery powered trains as they enter the market.

The trains have good economic rationale too, a comparative study by the Technical University of Dresden, shows that the battery-operated train has an advantage to standard diesel trains across the service life of 30 years. Bombardier is a global leader in transportation creating cutting-edge planes and trains. Based out of Canada, Bombardier has engineering sites in 28 countries.