The Boeing 777X's folding wing tips are a first for commercial aviation.

The first test flight of Boeing's new 777X thundered off the runway at Everett, Washington's Paine Field on Saturday, January 25, 2020, with high hopes riding on its extra-long wings.

It is these carbon fiber-reinforced polymer (CFRP) wings that make the 777X special. Like some of their fighter jet counterparts whose wings fold up, 11 feet (3.5 m) at the tips of the 777X's wings also fold, a first for commercial aviation.

The process of folding and unfolding the wing tips takes 20 seconds, and the tips automatically fold up when the plane's ground speed is less than 50 knots.

With the 777X, Boeing needs to reassure the flying public that its planes are safe following the unfortunate situation with the 737 Max.

The 777X is the largest airplane that Boeing has ever built, and it is designed to go head-to-head with Airbus's A350 XWB, where "XWB" stands for "extra wide body." 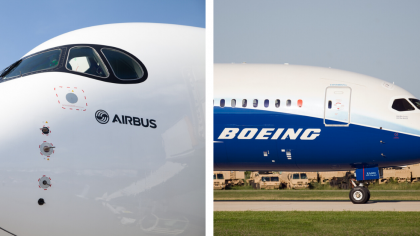 It is this combination of wings and engines that will give the new plane greater efficiency. According to The Air Current, the 777X will be 33% more cost-efficient per seat than Boeing's 747-400, and 13% more efficient than its 777-300ER.

The 777X's three-hour and 51-minute test flight took it over Eastern Washington before it turned back west for several victory laps around Mt. Rainier and landing at Boeing Field in Seattle.

RELATED: THE NEW BOEING 777X HAS WINGS THAT FOLD UP AND THE WORLD'S LARGEST TWIN-ENGINE

The next steps for the plane include completing its testing program, then seeking certification from the Federal Aviation Administration (FAA). This certification may take longer than usual because of fears that the 737 Max's certification was rushed.