First Ever Footage of Water Droplets Being Blown Up by Lasers

For the first time ever, scientists have been able to record the microscopic explosion of water droplets from bright x-ray lasers. The Department of Energy’s SLAC National Accelerator Laboratory was where this footage was recorded, and it could revolutionize how lasers are optimized and grant researchers a better understanding of how x-ray energy is transferred. Part of why this has never been captured before is because it happens so incredibly fast, in a fraction of a second. Take a look at the video below to see the microdroplets get vaporized after being blasted with strobe energy from the world's brightest x-ray machines.

"Explosions are spectacular and intriguing phenomena that expose the dynamics of matter under extreme conditions. We investigated, using time-resolved imaging, explosions induced by ultraintense X-ray laser pulses in water drops and jets. Our observations revealed an explosive vaporization followed by high-velocity interacting flows of liquid and vapour, and by the generation of shock trains in the liquid jets." ~ Nature Physics

The frames in this video ranged from five billionths of a second to one ten-thousandth of a second after the laser pulse which the team shot at the droplets and streams of water. The x-ray pulse is seen ripping the droplets apart, where tiny water particles start to vaporize, and the remaining water slowly gets pulled towards the adjacent drop.

"X-ray laser explosions have predictable dynamics that may prove useful for controlling the state of pure liquids over broad energy scales and timescales, and for triggering pressure-sensitive molecular dynamics in solutions." ~ Nature Physics 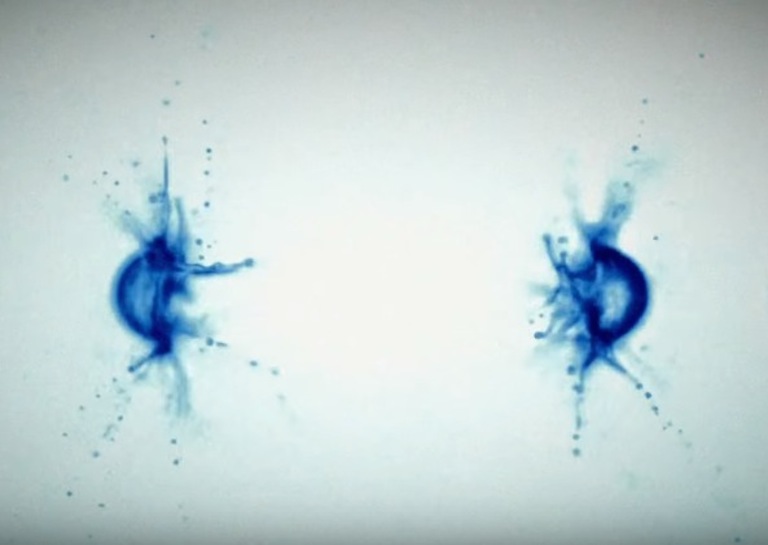 The team is hopeful that further advancements from what they currently learned will allow them to explore changes in states of matter at speeds faster than are currently possible. Through further study in microscopic x-ray pulsing, these scientists will be able to determine subsequent experiments that will be on the cutting edge of knowledge in the field of energy pulses and matter state changes.