First Ever Robot-Assisted Spinal Surgery Undertaken in US

A multi-surgeon team from Penn Medicine successfully completed the first surgery using a trans-oral robotic approach. The new approach is the world's first robotic surgery technique of its kind.

In a statement released last week, University of Pennsylvania’s Medicine department announced the school had performed the first-ever robot-assisted spinal surgery. The surgery was executed by a multi-surgeon team led by vice chair of operations in the Department of Neurosurgery Dr. Neil Malhotra at the hospital of the university in August of 2017.

Cancer of the bones and skull

The groundbreaking surgery spanned over two days and more than 20 hours and saw the doctors use Da Vinci's robotic arms to remove a rare tumor from patient’s Noah Pernikoff's spine. Pernikoff was diagnosed with chordoma, a rare type of bone cancer usually found in the bones of the skull base and spine.

Chordoma affects only one in 1 million people each year and is usually asymptomatic so it often goes undetected until far too late. Pernikoff discovered his due to a car accident.

“I’m lucky because they caught mine early. For a lot of people, if it’s not found and treated early, it’s lethal,” Pernikoff said. “The doctor said if I hadn’t discovered it through the car accident it probably would have kept growing until it came to a point on my spinal cord where it caused paralysis or death.”

However, Pernikoff was not so lucky with the location of his tumor. Lodged where his spine met his skull, the particularly sensitive spot made the stakes of this surgery very high. 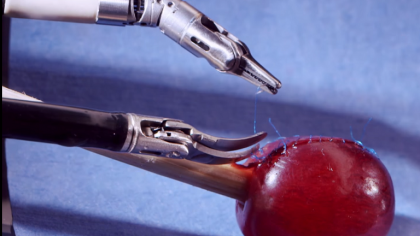 Faced with this challenge, Malhotra requested the help of Bert W. O'Malley Jr., chairman of the Department of Otorhinolaryngology: Head and Neck Surgery, in order to use a trans-oral robotic (TORS) approach during the surgery. Invented at Penn University, TORS is the “world's first group of minimally invasive robotic surgery techniques to remove benign and malignant tumors of the mouth and throat.”

"This would be a first ever use of a robot in this manner—a rare approach to an already rare and complex case,” Malhotra said. The placement of the tumor threatened the structural integrity of Pernikoff’s spine which could lead to permanent paralysis.

There was also the risk of causing damage to important functions such as fine motor skills and that of the tumor growing back if it were not completely removed. The surgeons devised a three-part operation for tackling these issues.

The neurosurgeons first went through the back of Pernikoff’s neck to cut the spine around the tumor. This allowed them to complete the second stage of removing the tumor through the patient’s mouth.

“This surgery was groundbreaking and it’s a wonderful example of how versatile TORS is for tumors in the head, neck, and now spine.”

This is where the surgical robot came into play. The team used the robotic assistant to clear a path so Malhotra could efficiently remove the entire tumor, and part of the spinal column, through the mouth.

The surgery proved a success. “The capability of this technology and procedure is revolutionary,” O’Malley said. “This surgery was groundbreaking and it’s a wonderful example of how versatile TORS is for tumors in the head, neck, and now spine.”

Pernikoff is reported to be back to work and healthy. This happy ending will bring some comfort to those worrying about a robotics future. Depending on society’s use of robots, the new technologies may become some of our best assets.