Scientists have discovered the first single-molecule magnet that may be used to massively increase the storage capacity of hard disks without increasing their physical size.

In today's digital world, one of the most pressing technology needs is to find more and better efficient ways to store and process digital information.

Before the publication of the study Magnetic Hysteresis up to 80 Kelvin in a Dysprosium Metallocene Single-Molecule Magnet led by Professor of Chemistry Richard Layfield at the University of Sussex in England, it was only possible to synthesize single-molecule magnets with blocking temperatures that were reached by cooling with considerable expensive and scarce liquid helium.

The team at the University of Sussex in collaboration with Sun-Yat Sen University in China and the University of Jyväskylä in Finland, reported a new single-molecule magnet (SMM) which is a type of material that retains magnetic information up to a characteristic blocking temperature. 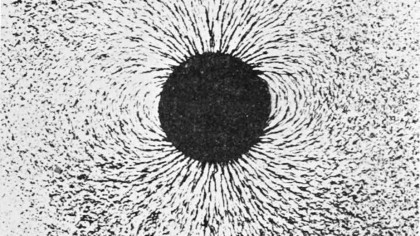 In the paper, published in the journal Science, the scientists explain how they successfully designed and synthesized the first SMM with a blocking temperature above 77 K, the boiling point of liquid nitrogen, which is both cheap and readily available.

"Single-molecule magnets have been firmly stuck in the liquid-helium temperature (–196°C) regime for over a quarter of a century. Having previously proposed a blueprint for the molecular structure of a high-temperature SMM, we have now refined our design strategy to a level that allows access to the first such material," Professor Richard Layfield said.

SMMs are molecules with the characteristic of remembering the direction of a magnetic field that has been applied to them over relatively long periods of time once the magnetic field is switched off. This makes possible to write information into molecules.

"Our new result is a milestone that overcomes a major obstacle to developing new molecular information storage materials and we are excited about the prospects for advancing the field even further," said Professor Layfield.

The scientists report a chemical strategy to access the dysprosium metallocene cation which displays magnetic hysteresis above liquid-nitrogen temperatures. According to the Abstract, the magnetic blocking temperature of TB = 80 K for this cation overcomes an essential barrier towards the development of nanomagnet devices that function at practical temperatures.

The new dysprosium metallocene compound is the culmination of several years of scientific research. According to the scientists, the project has required the development of new approaches in organometallic lanthanide chemistry as well as deep insights of the relationship between the microscopic electronic structure and magnetic properties of the studied systems.

"Computational methods based on quantum mechanics and the theory of relativity play an important role in the characterization and design of new single-molecule magnets. The large computational resources available today have enabled, for example, to clarify the interaction between crystal vibrations and the electronic structure of molecules studied in the present work," postdoctoral researcher Akseli Mansikkamäki from the department of chemistry of the University of Jyväskylä explains.

According to the research, their intrinsic memory properties often vanish if they are heated more than a few degrees above absolute zero (-273°C). However, the first SMM may change this, enabling advancements in quantum computing.

Quantum computing is computing that uses quantum-mechanical phenomena such as superposition, entanglement, and interference.

According to Christopher Barnatt, in time, Intel could be manufacturing tiny quantum processors containing thousands or millions of qubits. "Unlike conventional micro-processors these will still need to be super cold to almost absolute zero," Barnatt says.

The single-molecule magnet that is set to play such an important role in the future of quantum computing was the result of the co-ordinated effort of three universities.

The synthetic work and characterization of the prepared compounds was carried out by Professor Layfield’s research group while magnetic measurements were performed at Sun Yat-sen University under the leadership of Professor Ming-Liang Tong. Postdoctoral researcher Akseli Mansikkamäki carried out theoretical calculations and analyses at the Department of Chemistry of the University of Jyväskylä.

The study also provides insights and a roadmap on how to further improve the magnetic properties of SMMs and how to bring exciting technological applications including quantum computing closer to reality.