First-of-Its-Kind Smartwatch Turns Your Skin Into a Touchscreen

The LumiWatch is equipped with a projector that reproduces an interactive display on the user’s arm.

Researchers at Carnegie Mellon University have invented a smartwatch that can turn your skin into a touchscreen. This first-of-its-kind watch has been called the LumiWatch and it is equipped with a projector that reproduces an interactive display on the user’s arm that can be tapped or swiped.

"Appropriating the human body as an interactive surface is attractive for many reasons. Foremost, skin provides a natural and immediate surface for dynamic, digital projection."

The watch’s designs were published in a paper entitled “LumiWatch: On-Arm Projected Graphics and Touch Input.” The paper describes the reason for using skin as an interface.

“Appropriating the human body as an interactive surface is attractive for many reasons. Foremost, skin provides a natural and immediate surface for dynamic, digital projection,” write the researchers.

The second benefit stated in the paper is that human bodies are always present with users and readily available. Finally, human bodies provide an interface that users are "intimately familiar" with and can therefore navigate with ease and competence.

The innovative gadget’s instruction guidelines are pretty straightforward. A simple swipe left unlocks the watch, displaying its apps along your chosen skin area.

The watch features a 15-lumen scanned-laser projector and a battery that can last for a whole day of intermittent use or one hour of continuous projection. The projector is equipped with three lasers, red, blue, and green, and their projection is bright enough even for outdoor use.

The watch runs on Android 5.1, can connect to Bluetooth and Wi-Fi, and also comes with a Qualcomm 1.2 Ghz quad-core CPU, 768MB of RAM and 4GB flash memory. The prototype measures 50×41×17 mm and projects approximately 40 square centimeters of space on which to interact with, five times the area offered by typical smartwatches.

Creating the futuristic watch, however, did not come without complications. “Developing this prototype required solving a number of difficult problems, including development of a suitable projector module, shallow-angle projection onto curved arms, and accurate 2D finger tracking,” stated the paper. 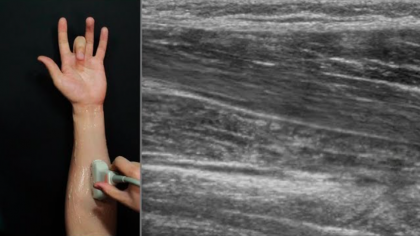 Although other watches have incorporated skin projections, the LumiWatch is the first ever to produce a usable one. “LumiWatch presents a novel combination of hardware and software capabilities, moving the vision of on-skin interaction significantly closer to reality and illuminating the imminent feasibility of projection-enabled wearables,” concluded the paper.

The paper was unveiled at the Special Interest Group on Computer-Human Interaction conference in Canada. The team describes the LumiWatch as “the first, fully-functional and self contained projection smartwatch implementation, containing the requisite compute, power, projection and touch sensing capabilities.”

A video posted last week by the LumiWatch team shows the prototype in use.