Brown Dwarfs are considered to be in between planets and stars in terms of classification. During formation, a collapse of cloud and dust would have created the planet but not enough mass was generated to start fusion reactions which give stars their glow, according to UCSC. Temperatures on the surface of the planet maintain around 250 Kelvin, equivalent to -10˚F. The presence of water-bearing clouds was discovered through modeling of the brown dwarf given the temperatures present on the surface. This resulted in accurate modeling showing that water vapor cloud features would be present on a planet, given the known characteristics, according to Gizmodo.

"The recently discovered brown dwarf WISE 0855 presents our first opportunity to directly study an object outside the Solar System that is nearly as cold as our own gas giant planets. However the traditional methodology for characterizing brown dwarfs---near infrared spectroscopy---is not currently feasible as WISE 0855 is too cold and faint." ~ Andrew Skemer 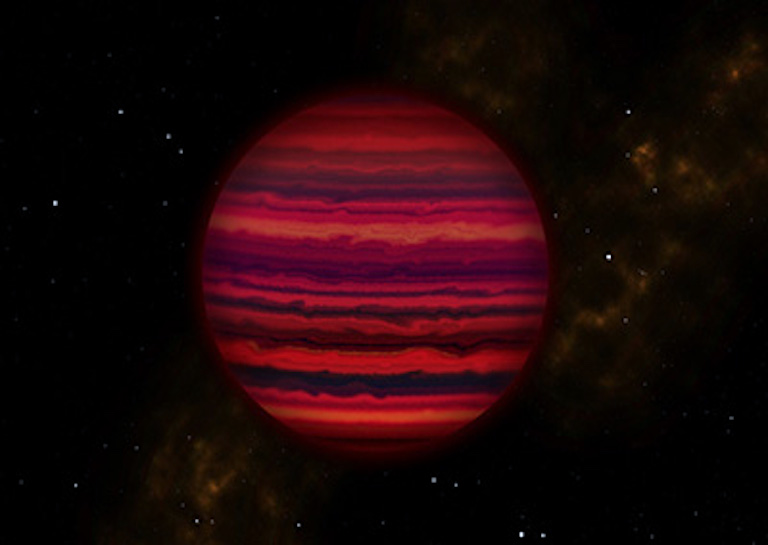 WISE 0855 has about 5 times the mass of Jupiter and it presents similar water absorbing abilities. However, through examination of Phosphine absorption found that WISE 0855's atmosphere is much less turbulent than seen on Jupiter.

"To characterize this frozen extrasolar world we obtained a 4.5-5.2 μm spectrum, the same bandpass long used to study Jupiter's deep thermal emission. Our spectrum reveals the presence of atmospheric water vapor and clouds, with an absorption profile that is strikingly similar to Jupiter." ~ Andrew Skemer

The study of WISE 0855 was conducted using the Gemini North telescope in Hawaii over the course of 13 nights, according to Scientific American. Data from this investigation yielded enough information to accurately characterize the brown dwarf as having water cloud features. Further study of the dwarf and others like it will allow researchers to gain a deeper understanding of how Jupiter functions as well as gaining a better grasp of cold clouds on other planets.