After months of doling out the specs, Fisker finally unveiled their EMotion electric vehicle.

Fisker finally released its EMotion all-electric vehicle at the Consumer Electronics Show in Las Vegas after months of giving away nearly every spec regarding the car.

The specs, however, remain impressive and can rival other headline-making EV releases coming from CES. The current price tag averages $130,000 each, but the company claims the car will have a range of over 400 miles. That even edges out the Hyundai Nexo's range announced earlier during CES. The price range matches those of its predecessor -- the Fisker Karma.

Henrik Fisker, chairman and CEO of Fisker Inc. said that he was pleased regarding the launch and ultimately the future of EVs around the world.

"We are truly entering a new era in the way the world thinks about vehicles, the way EVs are charged and the way personal consumer electronics are powered – with Fisker Inc. now clearly at the forefront of that revolution through our worldwide launches at CES. With the EMotion, we’re introducing edgy, dramatic and emotionally-charged design/proportions – complemented with technological innovation that moves us into the future. That design balance is what has made the Fisker brand emotionally connect with our consumers.”

And while Fisker said that he hopes the new startup will gradually introduce the vehicle to the EV market, he said the EMotion could hit the US first. He said it "will be produced in the United States at a location to be announced during the second half of 2018."

In conjunction with the vehicle's launch itself, Fisker also debuted the company's solid-state battery. He said that battery would give an electric car over 500 miles of range in a one minute charge. That would significantly outperform current electric cars on the market -- including Tesla. (And, for another point of comparison, the Hyundai Nexo promises 370 miles and just a 5-minute charging time.) 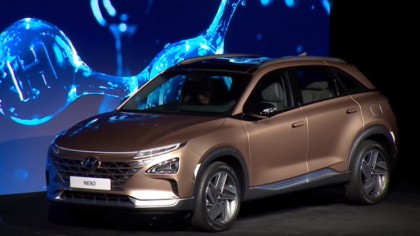 There's an important element to note regarding the charging times, and that issue all boils down to the actual promise involved. The Fisker Inc. press release said "The Fisker EMotion has been proportioned to accommodate an advanced high-energy density, patent-pending battery pack and cooling system. It can be charged through the vehicle’s proprietary UltraCharger™ technology, charging over 100 miles in nine minutes."

That means that it takes nine minutes for the vehicle to reach 25 percent of its charge, a claim easily mistaken when compared to other EVs on the market.

“We’ve also made the seemingly impossible, possible with our scientists spearheading the breakthrough in Flexible Solid-State battery technology – which is the next generation in charging everything from your personal cell phone to enabling mass adoption of electric vehicles due to unprecedented ranges and lighting fast charge times," Fisker said. "We’re incredibly excited to showcase working solid-state batteries and the vehicle, in-person, on such a massive global stage. Fisker Inc. is about breaking barriers, leading in automotive technologies and ultimately creating the most desirable, functional futuristic electric vehicles.”

Fisker, like other electric vehicles being showcased at this year's CES, will have to contend with the fact that charging stations are limited throughout the United States and other countries. But, like other EV automakers, Fisker remains hopeful that normalizing electric vehicles leads to infrastructure that supports their growth as a market.