The Danish automotive designer has grand plans for the future of his electric car company, including a battery that seems to do the impossible.

The Danish automotive designer behind cars like the Aston Martin V8 Vantage and the BMW Z8 relaunched his electric car startup this year and announced that the next car out the gate would be powered by a “breakthrough” in solid state batteries, one with a range of 500 miles and a charge time of one minute.

Originally, Fisker and his team were intending to use a brand new graphene-based hybrid supercapacitor technology but eventually settled on the standard lithium-ion instead. However, solid-state batteries like the ones Fisker has developed seem to be a safer choice than Li-ion and also possesses a higher energy density. That being said, they still lack specific features, such as temperature ranges, electrode current density and of course price wise, Li-ion just can’t be beaten.

But, Fisker Inc. claims they’ve found the perfect symbiosis of both power and price,

“This breakthrough marks the beginning of a new era in solid-state materials and manufacturing technologies. We are addressing all of the hurdles that solid-state batteries have encountered on the path to commercialization, such as performance in cold temperatures; the use of low cost and scalable manufacturing methods; and the ability to form bulk solid-state electrodes with significant thickness and high active material loadings. We are excited to build on this foundation and move the needle in energy storage,” said Dr. Fabio Albano, VP of battery systems at Fisker Inc and co-founder of Sakti3 to Green Car Congress.

The company has filed a patent and aims to have the technology ready for automotive applications after 2023; they blame the long wait on the lack of supply chains with certain raw materials and necessary manufacturing tools, a common occurrence with never before seen automation.

Meanwhile, Fisker’s EMotion is gunning for a 2019 release running on Li-ion for now. The all-electric car came with a wash of grandiose claims after Fisker said that the low-volume luxury sedan would have a range of over 400 miles.

“The Fisker EMotion has been proportioned to accommodate an advanced high-energy density, patent-pending battery pack and cooling system. It can be charged through the vehicle’s proprietary UltraCharger™ technology, charging over 100 miles in nine minutes.”

It's still unknown as to how Fisker plans on charging such a vehicle since the technology just doesn’t exist, there are no stations capable of delivering the power needed to achieve such numbers, though a few souped-up chargers are in the works, Fisker has made no statement regarding a network able to support his car. 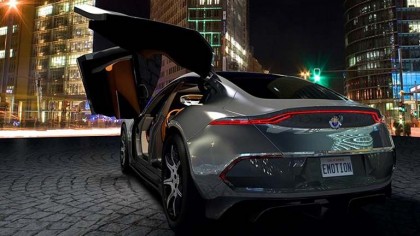 In an interview with Bloomberg last year, Fisker called EMotion a “spiritual successor” to the Karma electric car he launched in 2012.

“We have really been working in stealth mode,” Fisker said to the news outlet. “For the last two years, I have been looking at battery technologies and wanted to see if there was something that could really give us a new paradigm. We had the strategy of developing the technology as fast as possible without getting tied down to a large organization, which would hold us back. Now we have the technology that nobody else has. And there is nobody even close to what we are doing out there.”

Fisker is planning on showing a prototype of the new solid-state battery at CES in 2018.