Inverters are the main component in solar PV arrays when it comes to transmitting power since they convert the Direct Current generated by the solar panels into Alternating Current (AC) for regular use. Some of the DC power is used by the inverter itself, so efficiency is usually around 95 percent maximum. Selecting an inverter is therefore of critical importance.

There are two types of inverter: micro inverters, which are located at the base of each panel, and string or central inverters which are connected to a series of solar panels. String inverters are usually fixed to an interior wall inside the building and they are mostly used where solar panel systems incorporate modules with similar characteristics and under similar conditions. Micro inverters are typically used where an array has a number of different types of modules or where there are differences in orientation, shading or other circumstances.

Some manufacturers have incorporated Maximum Power Point (MPP) tracking into their inverters. This feature automatically adjusts the electrical load in order to generate as much power as possible, taking into account momentary light levels, shading, temperature and module characteristics. They also incorporate Anti Islanding Protection, a safety shutdown feature which detects interruptions in grid connection and switches off the inverter instantly in response.

SMA is a German company founded in 1981 and based in Niestetal. It is a leading global brand in the PV sector and employs over 5,000 people in 21 countries around the world. Its reputation for after sales service has enhanced its popularity with research by IMS in 2013 naming the company as the most popular brand in the UK. The IMS survey PV Inverter Customer Survey – World – 2013 surveyed more than 70 inverters in use all over the world and SMA came out on top, both within the UK and globally. However, more recently, the company has experienced a few problems, largely as a result of their dependence on the European market although its performance in Japan appears to have improved this year with the company being named as the ‘leading western supplier’ with over 1 GW of inverters supplied to that country. Government policy decisions in the UK in 2014 also had an adverse effect on the company’s fortunes. The company has maintained its strength in the US, which is now its main growth market. The most popular SMA brand over the years has been its ‘Sunny Boy’ inverter, the new variant of which features an integrated battery for energy storage (Sunny Boy 3600/5000 Smart Energy). All SMA inverters incorporate ‘Webconnect’, a feature which allows users to monitor energy input/output online. 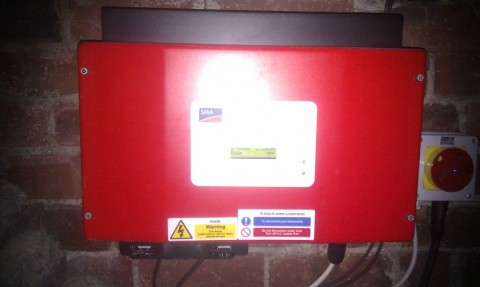 Enphase produces a range of inverters for both residential and commercial use. The company also ranked highly in the 2013 IMS Research survey, breaking into the top ten brands and enjoyed even greater success in 2015, with 575 MW of micro inverters shipped across the US according to Greentech Media. Its strongest market currently is the US with strong growth in Australia.

Fronius is an American company based in Milton Keynes in the UK and one of the leading inverter manufacturers in the world. They specialize in inverters with Wi-Fi connection that enables users to connect them to an online monitoring system. The company received a top award in 2008 for its Fronius IG Plus series and the Frost & Sullivan Best Practices Award 2008 for outstanding service. In 2009, the company introduced the IG TL transformerless inverter which incorporated an easy system monitoring feature and simpler inverter updating. Fronius followed this in 2010 with the CL string inverter incorporating high-yield electronics and a modular system design. Other popular brands include the Fronius Agilo, Symo, Primo and Galvo.

Samil is a Chinese company with a presence in many countries around the world. The company supplies both micro inverters and string inverters which are named after natural water features – pond, lake, river etc – in order to make decisions concerning the right size of inverter much more easier. The company was born from the Samil Group in 2008 and is one of the fastest growing inverter manufacturers worldwide, specializing in research & development and production with more than 200,000 string inverters sold globally across more than 20 countries. It employs more than 700 people globally and has subsidiaries in Munich, Milan, Reading, Lyon, Sydney, San Francisco, Beijing, Shenzhen and Suqian.

ABB produces a wide range of inverters from small micro inverters through to three-phase string inverters and megawatt-sized central inverters, intended for a variety of installations from household arrays to larger commercial PV plants. The company’s inverters are high quality but generally cheaper competitors to SMA and Fronius. The company launched a new string inverter called CORE in April this year at the 2015 SNEC PV Power Expo in Shanghai. CORE was specially developed for the Chinese market and has many superb features aimed at reducing DC distribution losses for large-scale PV plants and improving energy efficiency. In June, ABB also appeared at the Intersolar Europe show in Munich, Germany where it showcased its new UNO-2.0/3.0/3.6/4.2-TL and TRIO-50.0 string inverters, the new PVS980 central inverter and new packaged solutions for utility-scale PV plants. It also presented a new React PV inverter and storage system capable of storing, distributing and optimizing solar energy use in residential systems through an integrated battery and management system.

Solaredge is based in Israel and is a rapidly growing company widely considered to be the main rival to Enphase. Its inverters are tailored for a range of applications, from the residential solar sector to larger commercial and utility-scale installations. Solaredge inverters are known for their design simplicity and safety features, which include fault detection and rapid shutdown. The company recently introduced its new HD Wave technology which it claims helps to reduce magnetic effects and cooling.

Solaredge is a popular choice for SolarCity with 27 percent of their installations in the US using this brand between the first and third quarter of 2014, according to GTM Research. Since 2010, the company has shipped around 1.3 GW of DC optimized inverter systems with installations in more than 70 countries.