Likened to cartoon character Wile E Coyote by fans, "Mad" Mike Hughes finally took his rocket skyward before coming back down for a hard landing.

After months of delayed starts, public debates, and growing number of followers to the saga, flat earth theory proponent "Mad" Mike Hughes finally took to the skies -- and quickly came back down.

In total, he spent roughly $20,000 chasing his dream since 2016 -- flying high enough into space to bring a picture back to earth and prove to the world that Earth is shaped like a flat frisbee.

"I'm tired of people saying I chickened out and didn't build a rocket," Hughes said. "I'm tired of that stuff; I manned up and did it."

Hughes used a homemade rocket to propel himself nearly 1,900 ft into the sky before making a hard landing in the Mojave Desert. Hughes told media outlets that he estimated his rocket reached 350 mph on speed before he pulled his parachute. Hughes dropped too fast after deploying the first chute, so he deployed a second one.

"This thing wants to kill you 10 different ways," said Mr Hughes, who had an altimeter in his cockpit to measure his altitude.

In total, the flight lasted between three to four minutes, and the rocket itself landed roughly half a mile from the ramp.

While the 61-year-old man currently works as a limo driver, Hughes has a history in building rockets and a deep understanding of physics. He's been building them for years, and even launched one in 2014.

"At least I can go home and have dinner and see my cats tonight," he added.

Leading Up to the Launch

Over the course of nearly two years, Hughes captured global attention -- and not all of it was positive. Flat-Earthers loved Hughes's eccentricity and daredevil attitude and tendencies. However, those who had made it to space themselves even voiced concerns for Hughes's safety and well-being during the launch.

"I hope he doesn't blow something up," retired NASA astronaut Jerry Linenger said in an interview. Linenger spent four months orbiting the earth more than 2,000 times in 1997.

"Rocketry, as our private space companies found out, isn't as easy as it looks," he added.

That was also something Hughes quickly learned himself during the project. In early February, Hughes had his third aborted launch. The third failed launch attempt seemed to be the final in the minds of many -- including media, the public, and even some of his fan base. 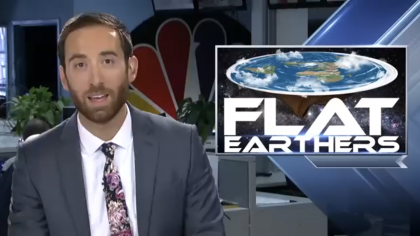 Hughes, however, wanted to prove Linenger and other astronauts wrong in their understanding of Earth. And while he didn't make it to his goal with this launch, it's not stopping his plans. He already announced to Facebook followers than he wants to build a Rockoon -- a rocket carried by a balloon that would then separate and light post-separation.

Hughes even called his own story "incredible."

"It's got a bunch of story lines — the garage-built thing. I'm an older guy. It's out in the middle of nowhere, plus the Flat Earth. The problem is it brings out all the nuts also, people questioning everything. It's the downside of all this."

And even after all the conversations, all the arguments with "round-earthers", and several restarts on the project, Hughes maintains that his mission was bigger than proving the Earth is flat.

"Do I believe the Earth is shaped like a Frisbee? I believe it is," he said. "Do I know for sure? No. That's why I want to go up in space."

How the U.S. Military can switch to synthetic fuels and help save the world