A team of scientists, armed with data collected by underwater robots, have offered a clear assessment of the size and severity of the biggest dead zone on Earth.

Robotics has grown leaps and bounds in the past 2 decades, with researchers developing bots which do everything from teaching coding language to children to operating as a personal assistant. However, they also have the capability to uncover and document, unfiltered, some of the environmental conditions which have resulted from climate change. Ocean drones, for instance, perform the duty of patrolling the world’s oceans collecting valuable data that can be used by scientists to assess the immediate and long-term effects and climate change more concretely.

Some of the most surprising results come from missions carried out by underwater robot missions. Recently, they uncovered the largest dead zone existing in the world from carrying out an unmanned expedition close to the coast of Oman. The results were rather unsettling, as they not only confirmed what scientists had already known but also served as an indication that the problem is far greater than even they had imagined. Scientists from the University of East Anglia (UEA) supervised the research. 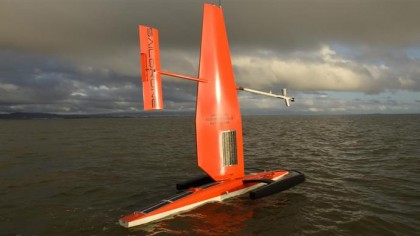 The details about the expedition and its findings appear in a study, titled “Physical Controls on Oxygen Distribution and Denitrification Potential in the North West Arabian Sea”, which was published in the Geophysical Research Letters journal on April 27th, 2018.

The research was specifically aimed at using various methods to “to investigate spatial and seasonal differences in the ratio of oxic and suboxic water across the Gulf of Oman and waters exported to the wider Arabian Sea”. They track the process by which some regions move from being oxygen minimum zones to be being dead zones—as a result of a combination of agrochemical use or climate change—all by using important data gathered by an ocean glider.

The fleet of robots carried out their mission for a total of eight months, traveled depths of 1,000 meters in the Gulf. This was crucial, as the affected region exists at depths between 200 and 800 meters, and most troubling, covers an area that is larger than the entire country to Scotland.

The map below demonstrates how ocean areas located closer to urban areas are more vulnerable for either becoming dead zones or possessing dead zones that grow in size.

The team feels that their data offers a more accurate assessment of oxygen loss to the area because they allow them to go beyond simple surface predictions, which don’t paint the full picture. “[W]e show oxygen loss in the Gulf of Oman (from 6–12 to <2 μmol/kg−1) not represented in climatologies,” they also wrote in the paper.

Dr. Bastien Queste, lead researcher and co-author of the paper, discussed the severity of the problem:

“Our research shows that the situation is actually worse than feared—and that the area of dead zone is vast and growing,” adding solemnly, “The ocean is suffocating.”

The message in the team’s research is clear: with the oxygen in the world’s oceans also goes a wealth of nutrients required to maintain the existing marine life. Dr. Queste, offering a big-picture perspective on the growing issue of dead zones, was unrestrained in his assessment: “It’s a real environmental problem, with dire consequences for humans, too, who rely on the oceans for food and employment.”