Miso Robotics' famed Flippy the Robot officially joined the humans who work as line cooks at Caliburger in Pasadena, California.

A year ago, burger chain Caliburger announced it would employ its most unique worker yet -- a robot named Flippy. And now, a year later, Flippy has finally 'graduated' from his training to join the ranks of line cook.

The AI-based robot from Miso Robotics will now work alongside the fast-food restaurant's human crew.

Since September 2017, Flippy has been practicing and learning at Caliburger's Pasadena restaurant. The robot has only started working 'full time' recently.

“This isn’t about replacing jobs. This is about a third hand in the kitchen.”

“People see a robot, they hear robot, they assume job replacement,” said David Zito, the CEO of Miso Robotics, which created Flippy with the Cali Group, the owner of the Caliburger chain. “This isn’t about replacing jobs. This is about a third hand in the kitchen.”

Apparently, more companies are looking to gain more hands in the kitchen, as the partnership with Caliburger and interest from other companies has led to Miso Robotics successfully raising over $14 million in disclosed funding.

Flippy could help close a gap between the high turnover rates often associated with being a line cook in an industry as fast-paced as quick service.

“Flippy is novel, but definitely not a novelty,” Zito told TechCrunch in an interview ahead of the announcement. “As it improves its speed and skillset over time such as frying, chopping and grilling menu items and adding seasoning or cheese to patties, CaliBurger will see an increase in productivity. In addition, we’ve modeled our pricing based off expected value each robotic kitchen assistant can provide at scale.”

Despite Flippy's efficiency, AI-based precision, and general 'happy' persona (for a robot), many quick-service workers have pointed out the hypocrisy of employers to invest in robotics over real people.

At $60,000, Flippy's entry-level price tag certainly costs more than the average line cook would bring in yearly. Miso Robotics also requires Flippy owners to invest in a 20 percent recurring annual fee for maintenance and service. (Miso leverages the time saved and consistent, improved results as enough to make up the 20 percent annual spending in the profit margin.)

But if these companies are willing to invest in robots that are more expensive than their human counterparts, many in the industry wonder if humans will ever get the same investment?

In the United States alone, various states are fighting to raise minimum wages to $15/hr in order to have livable wages in areas where "getting a new job" doesn't work due to job scarcity.

"People who work in fast-food aren’t scared of robots – what’s really scary is getting paid so little we need food stamps and public assistance to take care of our families," said Rosalyn King, a McDonald’s worker from Detroit who is active in the union-backed Fight for $15 movement, in an interview with USA Today. 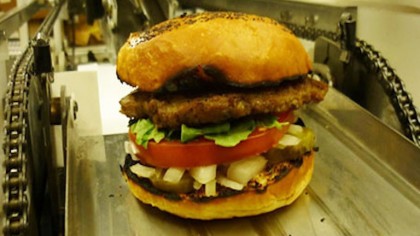 However, Miso Robotics and other leaders within the Cali Group don't want to replace humans. They just want to provide some stability for customers and other employees in the roles that have become difficult to find stable, reliable help.

“We train them, they work on the grill, they realize it’s not fun...and so they leave and drive Ubers,” John Miller, the CEO of the Cali Group.

Should Flippy's success continue, Miller said he would bring the robot to other chain restaurants in Seattle, Washington D.C., Annapolis, and Baltimore.