The Floating Houses of IJburg, Amsterdam 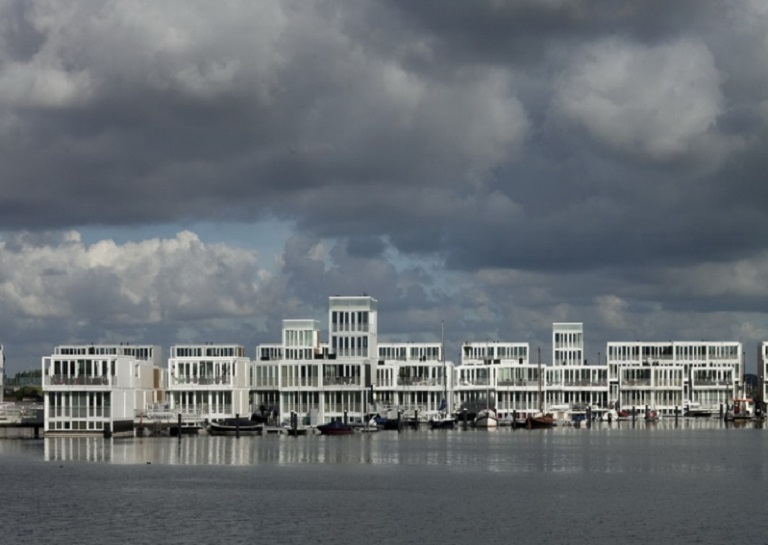 With the threat of massive floods looming over the horizon with the terrible tale of history waking behind the Netherlands, it comes as no surprise architects decided not to fight against the water and build houses that float.

Designed by Architecten bureau Marlies Rohmer in Amsterdam within the Netherlands, the team decided to take the water head on by building directly on top. The Netherlands have an extensive history with floods, leaving people living "close to the edge" as the land is partially protected by by dikes, on mounds, on shore or now, even floating.

With recent technology advancements making floating homes more viable, safe, and affordable, new neighborhoods are being implemented across the country as a means to save space, and save houses before the next flood strikes.

The houses, described as a concrete block resting also partially on aluminum with half a story protruding from the water and a lightweight timber  frame comprises the structure. The aesthetics are accounted for by covering the walls with fiberglass and plastic latches. The houses are then mounted i place atop two steel mooring poles which enable the house to fluctuate up and down corresponding with the depths of the water. Each house is approximately 275 sq. meters. 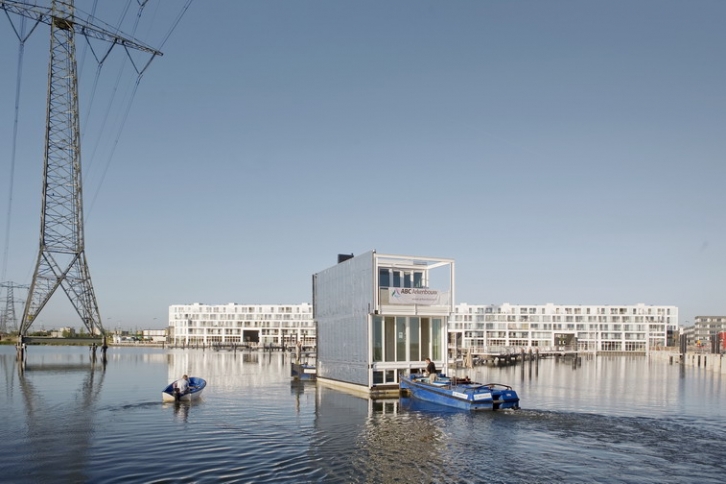 The houses are per-assembled elsewhere and then carried by boat to their final resting place. One such neighborhood, consisting of many houses accounts for 10 625 m² of living space. The project's first stages were completed in 2011, and since, nearly 20,000 people have already moved in. When the final stages are finished, the neighborhood is said to contain 18,000 homes for 45,000 people including schools, shops, leaser places, restaurants, and beaches, according to Amusing Planet.

The average floating house runs for US $500,000, however, earthquakes remain a concern for one of the architectures.

“Our needs are unique [compared with people living on land],”

“If there’s a quake and the dock breaks up, we need to figure out how to tether ourselves together to stay safe.”

The idea remains a unique yet effective approach to resolve the space and building issues currently experienced within Amsterdam. While the cost of the house remains high, its ability to resist flooding in the long run gives it the potential as a wise investment to save the house where ground based homes will succumb to a watery grave.

Can Floating Cities Save Us From Rising Sea Levels?