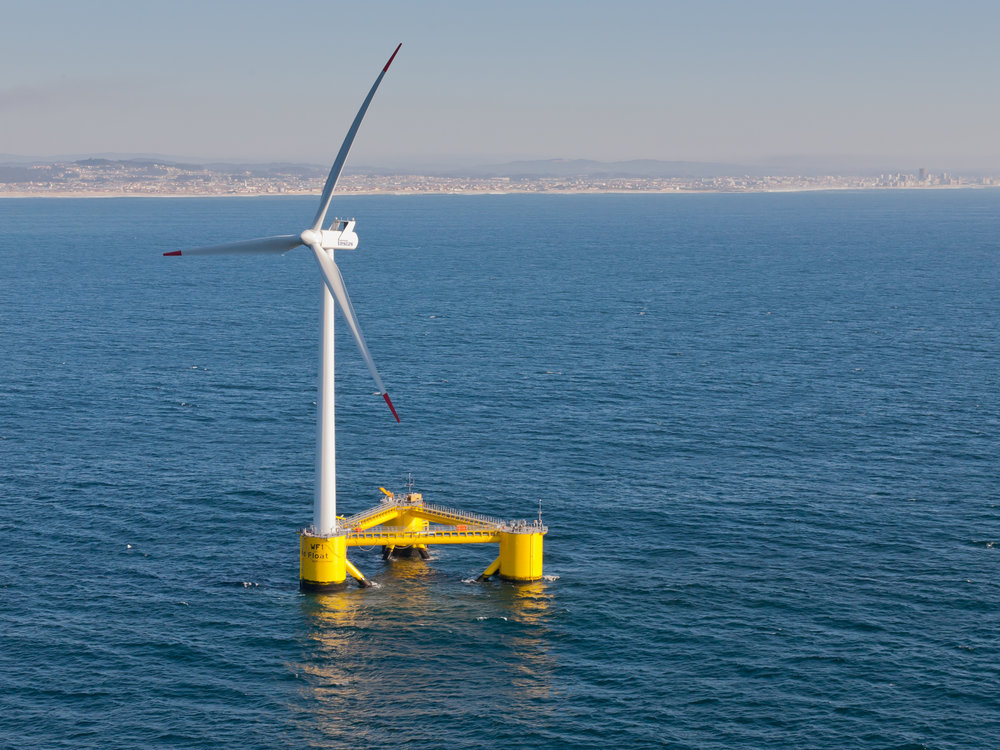 Increasingly, as reported on Interesting Engineering by Trevor English, solar energy companies such as Japan’s Kyocera are constructing new solar energy plants on floating platforms deployed on lakes and reservoirs. Kyocera has three of them up and running already and are also preparing a new mega project for deployment on a drinking water reservoir behind the Yamakura Dam, 32 kilometers east of Tokyo.

As Trevor English explains, besides generating electricity, floating solar helps to cool the panels thereby making them more efficient and also shades and cools the water, thereby preventing or restricting the spread of potentially harmful algal growth. These projects also help to slow the rate of evaporation from the water, thus helping to preserve water levels during increasingly hot summers.

The rationale behind these projects is more or less identical – lack of space to deploy conventional terrestrial solar. However, the floating platform principle is not limited to solar. Indeed, the global wind energy sector has been deploying floating wind farms for a number of years, the technology is also suited to marine energy projects, and there are a number of ingenious hybrid designs ‘floating around’ involving multi-technology approaches such as wind and solar.

Prior to the recent appearance of these floating solar projects, floating platforms have largely been used for data collection in order to cut costs. For example, in 2014, French company Nass&Wind Offshore deployed a 12 meter diameter floating platform incorporating a range of measurement instruments to collect data on wind speeds and sea conditions off the coast of Brittany. At about the same time, Mainstream Renewable Power deployed the North Sea’s first commercial floating LiDAR wind measurement device at the Narec Offshore Anemometry and Research Platform, off the coast of Northumberland. 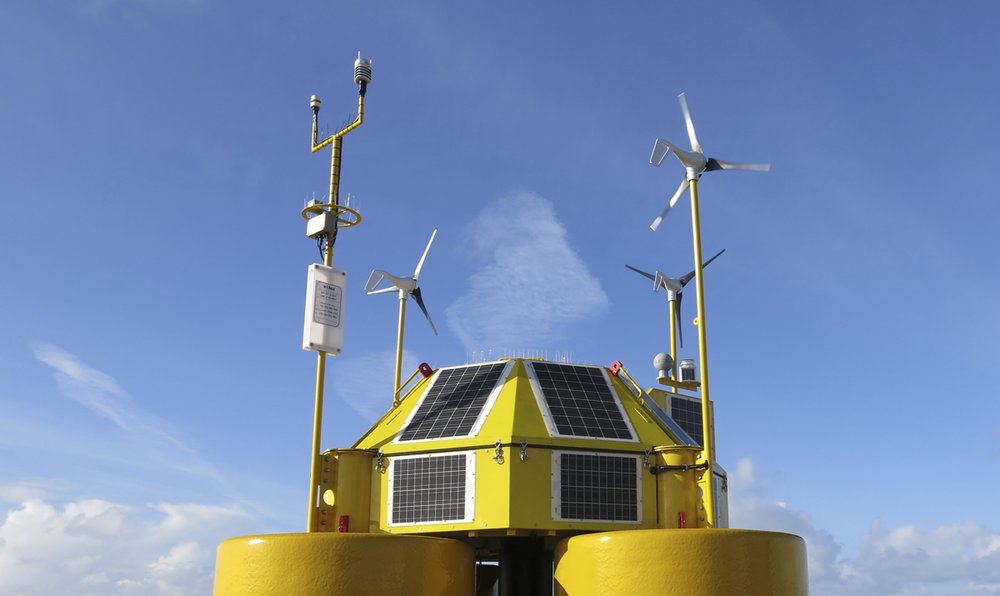 Floating wind turbines are certainly not new, but they are still very much in their infancy, largely restricted to various demonstrator projects. The idea has been around since at least 2006 when researchers at the Massachusetts Institute of Technology (MIT) and the National Renewable Energy Laboratory (NREL) designed such a turbine with steel cables securing the corners of the platform to the seabed. Japan took the lead in 2009 with a demonstrator project deployed off the coast of Norway and another off the coast of Portugal in 2011. Currently, Japan has three floating offshore wind projects in operation, including the world’s first floating substation. It has further demonstration projects in the pipeline.

The US is following on behind with plans to develop a pre-commercial floating turbine array off the Pacific west coast. The three European countries most involved with floating offshore wind are France, Portugal and Scotland.

In June 2015, the Energy Technology Institute (ETI) identified floating offshore wind as one of the leading technology options for decarbonization of the UK energy system, providing around 8-16 GW of offshore wind generation capacity.

Floating offshore wind farms could have a range of benefits over and above their conventional cousins. For a start, any wind farm deployed in deeper waters will be out of sight away from coastal areas, thus reducing opposition to their development. They will also be able to take advantage of stronger winds further out to sea – typically 30 to 100 miles away from shore - thereby generating more energy. However, conventional deep water projects are expensive, largely because of the cost of foundations. Floating offshore wind platforms will avoid this. Furthermore, instead of being constructed on site, they can be assembled onshore and towed out to sea, thereby helping to reduce construction costs, particularly with regard to the requirement for heavy lift installation vessels.

Offshore wind markets that have increasingly looked at the floating platform approach include Japan, the US and a number of European countries, as well as the UK. Potentially, floating offshore wind could be particularly applicable to the Mediterranean and the Atlantic coastline. Unfortunately, the technology is still in its infancy and therefore has yet to be fully demonstrated at large scale. At present, there are over thirty floating offshore wind projects currently under development worldwide, but of these, only five have been demonstrated at full scale (in excess of 1 MW).

As with other nascent technologies, its full potential development has to be supported by government. If this is provided, a number of cost projections indicate that floating offshore wind could reach cost-parity with conventional fixed-bottom offshore wind at some point in the 2020s, with a leveled cost of energy (LCOE) of £85-£95 per MWh for large, commercial scale projects. Further cost reductions could be achieved over time.

Another technology to have embraced the floating platform approach is thermal energy. Just recently, professional services company Bureau Veritas (BV) has granted Approval in Principle (AiP) for a new 6,700 tonne, four-deck 1 MW floating platform called an Ocean Thermal Energy Converter (OTEC) that will be able to generate power from heat in the ocean.

The technology has been developed by the Korea Research Institute of Ships and Ocean Engineering (KRISO) although the principle has been discussed for many years, being first mooted in the 1880s. Prior to the appearance of this new Korean project, the only OTEC device in operation has been that overseen by Saga University in Japan. According to Pelc and Fujita (2000), up to 88,000 terawatt hours of power could be generated per year without affecting the thermal structure of the ocean in which these devices are deployed. Devices can produce cold water as a by-product which can be used for air conditioning and refrigeration. Japan has been the major nation contributing to OTEC development, from around 1970 when the Tokyo Electric Power Company constructed an OTEC project off the island of Nauru. The US has also developed OTEC projects, particularly off the coast of Hawaii and India tested a pilot device near Tamil Nadu in 2002.

The new OTEC device will be able to operate round the clock. It uses the temperature differential between cold water at depth and warmer water near the surface to generate power via a closed-loop of working fluid. This is vaporized, driving a turbo-alternator which generates the energy. It is then condensed and cycled through the system.

The OTEC will initially be deployed off the coast of South Tarawa in the South Pacific Ocean, in water 1,300 meters deep. If the project is successful it will be scaled up to produce a 100 MW commercial scale device.

If the technology can be demonstrated successfully and governments are willing to support it during its development, then floating renewable energy has a bright future. Several voices within the sector are optimistic, notably, most recently, Professor Carl Ross of the University of Portsmouth, who early this year suggested that the future could see floating islands incorporating solar, wind and tidal energy technologies, generating energy far out to see where they would be immune to opposition regarding noise and unsightliness and could even potentially provide homes for small communities of people. These islands would be anchored to the seabed by tubular pillars and could support wind turbines with solar panels covering the surface and tidal energy devices beneath them. Suitable areas for deployment could include the North Sea, off the west coast of Scotland and possibly the opening stretches of the English Channel.

This is quite an intriguing vision, but there is no doubt that floating renewable energy is a highly exciting technology with lots of potential for transformation of the global energy system if it can be developed and commercialized successfully.