Cornell University researchers have been working on a grant from DARPA and have used the money to make a quadrocopter flying robot that is able to navigate around obstacles in real time thanks to a new type of 3D vision.  This could lead to flying rescue robots that don’t need humans to control them. They would be able to make their own way in buildings that have been broken down or enter caves, alone. Of course there could be a downside to this if they got into the wrong hands as they could be sent out to track anyone down no matter where they tried to hide. 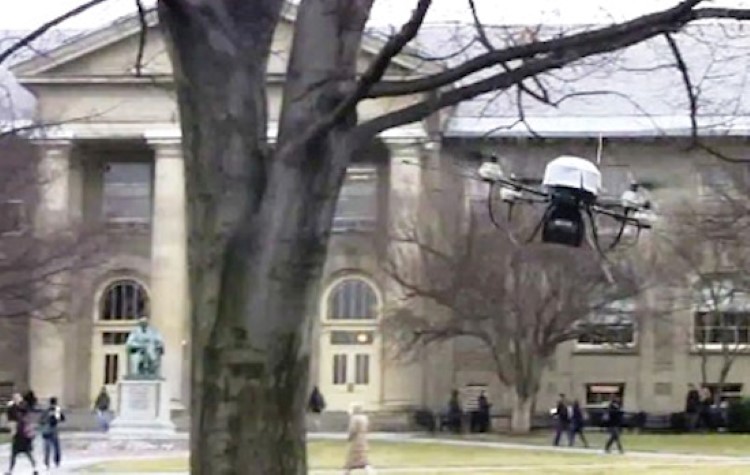 The quadrocopter flying robot was designed by Professor Ashutosh Saxena and team who attached video cameras to the quadrocopter, which gave it a sense of its surroundings. They then turned to modifications with software that had been developed by Saxena and used two dimensional images to be able to paint a 3D map of the surroundings of the robot. The flying robot was then able to break the map into chunks that were easier to process and find a pathway that allowed it to arrive at its destination without it crashing into things along the way.

The team painted simple 3D models of a test course on the campus of Cornell, which allowed the team to teach the robot how to get around a series of obstacles, along with determining what qualities obstacles may have. This for instance could be a branch being connected to a tree. Of course humans obviously known that a branch is connected to a tree, but robots don’t know this and just being able to see things in 3D is high level thinking for robots.

One of the main priorities for DARPA is being able to take away the human being and not having them have to steer robots. As you can imagine the person steering the robot does have to take a break and sleep at some point and often humans are unable to act fast enough to conditions that can be ever changing. While this hasn’t proved to be an issue with the current drones of today, in the future generations of autonomous robots could be held back. Bear in mind that some robots have to work in spaces that are tight and confined when it comes to search and rescue missions. A robot that could map out its surroundings and then learn how to get around, find the injured parties and then return unharmed would be the ultimate goal for robotics of the future. A flying robot that had 3D vision may be some time away but the team at Cornell University are working hard to make sure it happens.