Fogs as we know are clouds that appear very close to the Earth surface. They typically arrive at low lands, along river beds, lakes and places with increased air humidity at all.

Colorado River originates from the central Rocky Mountains in USA and flows in southwest direction through the Colorado Plateau, next is the state of Arizona and after that it crosses the Mexican border and forms large delta to empty its water into the Gulf of California. The river has carved through the rocks of Arizona one of the most impressive natural monuments – Grand Canyon. Although there is a river at the bottom of the canyon, mists are a rarity in Grand Canyon. This is due to the fact that the river passes through desert region with relatively high temperatures and dry air.
But no matter how rare they are, fogs occur in Grand Canyon and are always hard to forget. Mists arrive there once in a decade and they owe their birth to a phenomenon called “temperature inversion”. This occurs when cold air is trapped close to the Earth’s surface by warmer air above it, which is inverted picture of the usual situation where cold air is located above the warm one. The sun is heating the surface which in turn is warming the air above. Next the air that was heated elevates at higher altitude, where it expands and cools. This is the reason why normally the hot air is closer to surface than the cold air.

Andy Mussoline, a meteorologist at AccuWeather.com, gave an explanation of the circumstances that led to the fog.
"First, there was higher-than-normal moisture in the canyon. There was 0.75 of an inch of liquid precipitation that fell between Nov. 20 and Nov. 24 at the Grand Canyon National Park Airport [both snow and rain]. Normal precipitation during that time is only 0.19 of an inch, which converts to nearly 400 percent of normal precipitation within about a week of the event." he explained.
“Additionally, the average high temperature for this time of year is about 48 degrees Fahrenheit, which means there would be less evaporation of that precipitation than there would be in the summer months. This allowed more moisture to stay in the air inside the canyon.” Andy added. 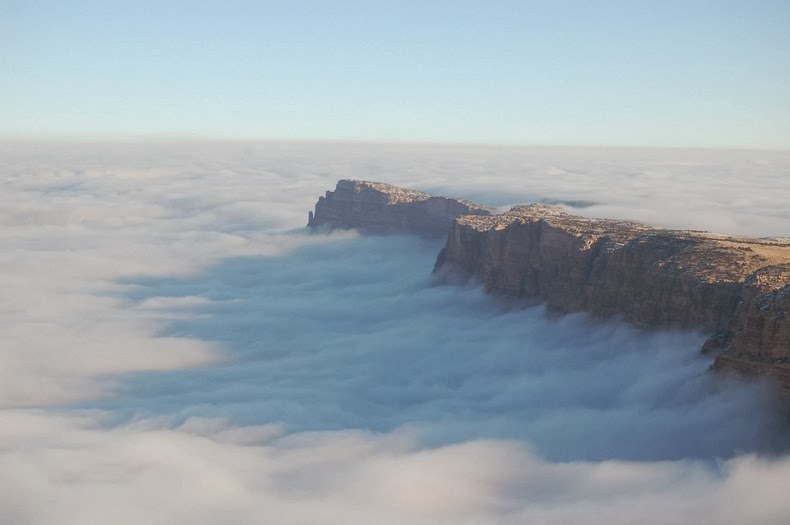 "A high pressure system settled into the region late last week and allowed for clear skies and calm winds, two important weather conditions that allow the air near the ground to cool rapidly. The rapid cooling of the ground allowed a temperature inversion to form." Andy also said.
Here we have another, much simpler explanation of the process given by Chad Meyers, meteorologist at CNN:
"Snow had fallen in the area beforehand and was beginning to melt. The melting snow created a cold layer near the surface. Think of opening your freezer and watching the cold air 'fog' falling to the floor. This cold air (because it is heavier than warm air) sunk into the canyon and created the fog."