Two years ago car manufacturer General Motors adapted NASA's robotic arm into a model that could assist their factory workers in their daily tasks. Now, it seems, competitor Ford has followed suit releasing full exoskeleton technology to help with employee fatigue and injury.

Building vehicles is a tough job, but @Ford is rolling out @EksoWorks #EksoVest to lessen worker fatigue in 15 plants globally. EksoVest is the latest advanced technology to reduce the physical toll on employees, providing #powerwithoutpain. Learn more: https://t.co/AntzRs99x8

The firm announced it was introducing the new upper body exoskeletal wearables in 15 plants globally to aid workers with repetitive overhead tasks that sometimes force them to lift the equivalent of a bag of flour up to 4,600 times a day. “Building vehicles is physically a tough job,” said in a statement Bruce Hettle, Ford group vice president, Manufacturing and Labor Affairs.

“We care about our employees and are trying to help them do their jobs with the least amount of wear and tear on their bodies possible," he added. The wearables are called EksoVests and they are the result of a unique partnership between bionics firm Ekso Bionics and Ford that saw its first pilot in November of last year.

Ford tested the vests in two US plants with positive outcomes. Despite their impressive ability to provide lift assistance from five pounds to 15 pounds per arm, Ford employees reported the vests were "comfortable" and "lightweight." “I don’t want the EksoVest to ever leave,” said Nick Gotts, an original EksoVest operator at Flat Rock Assembly.

A must for overhead jobs

“Any job that’s overhead, I wouldn’t work without it," he added. EksoVests are adaptable to workers' heights, ranging from 5 feet 2 inches (1.5 m) tall to 6 feet 4 inches (1.9 m) tall, and were refined to cater particularly to Ford factory workers through feedback provided by plant operators during the trials. 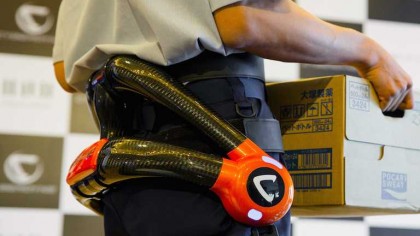 “My job entails working over my head, so when I get home my back, neck and shoulders usually hurt,” had said Paul Collins, an assembly line worker at Ford’s Michigan Assembly Plant during the first trial. “Since I started using the vest, I’m not as sore, and I have more energy to play with my grandsons when I get home.”

Ford has now extended its EksoVest program to all North American assembly plants as well as those in Asia Pacific, Europe and South America. For Ekso Bionics, the partnership has been an opportunity to showcase their life-altering technology.

“At Ekso, our mission is to augment human capability with wearable technology and robotics that help people rethink current physical limitations and achieve the remarkable,” said Jack Peurach, president and chief executive officer of Ekso Bionics. “Advancing our collaboration with a global leader like Ford, represents a major step forward in achieving our mission as our EksoVest is deployed around the world to enhance the well-being of its work force.”