The F-Vision was announced at this year's IAA Commercial Vehicles autoshow in Germany. The novel prototype is just a mere concept for now, but an impressive one nonetheless.

Ford made a surprise unveiling by its Turkish design center (Ford Otosan) at this year's IAA Commercial Vehicles show in Hannover, Germany. The American truck manufacturer revealed its F-Vision concept heavy-duty truck, a commercial vehicle that combines clean energy, autonomous driving, and many other futuristic features.

Not many details were given on the new F-vision. However, Electrek did state the vehicle was battery-powered but that it does not appear anywhere near close to production despite also unveiling an additional concept trailer option. 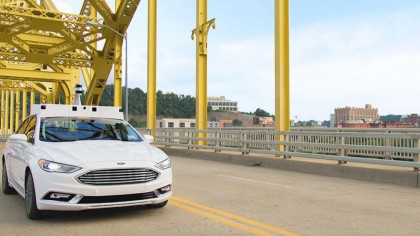 Motor Authorityclaimed F-Vision is the firm's first concept truck and that the vehicle was developed with an eye on a future starring eco-friendly lightweight semi trucks with no emissions. Ford Otosan is the carmaker's largest commercial vehicle production base which would explain why the prototype was developed there as opposed to an American base.

New Atlasreported that Ford's latest prototype is a level 4 autonomous truck which means it does not require human input to drive itself. It is also compliant with the European Road Transport Research Advisory Council's autonomous drive road plan for heavy commercial vehicles.

The impressive concept prototype can be completely self-driving or switch to being controlled by an onboard driver on the fly. The truck's engineers have said its design inspiration comes from comic book characters.

Live Trucking said the truck's front is reminiscent of Iron Man's helmet. Just like a comic book story, the prototype is also engineered to be adaptable to its environment through smart materials.

Tesleratirevealed that F-Vision's windows can automatically tint to counteract the sun's brightness or rise and lower to maximize or minimize the driver's view. The truck also features an interactive front-end capable of displaying a variety of designs and an automated link to its trailer for communication.

More importantly, the F-Vision features security measures that rival Tesla Semi's. The truck is said to have safety applications similar to Tesla's Convoy Mode that would allow drives to platoon with other F-Visions to optimize their security.

Finally, Car Scoopsreported the F-Vision was equipped with massive wheels and a lower section featuring air intakes surrounded by slim LED lights. It also showcased video camera side mirrors, recently unveiled by Lexus as an upgrade on traditional side mirrors, and a flush-mounted door.

The concept was revealed at the Hannover exhibition alongside the firm's F-Max tractor-trailer, winner of the show's 2019 International Truck of the Year Award. If Ford goes through with the new F-Vision, the vehicle will definitely be a significant addition in autonomous truck driving.

Just last July, the carmaker vowed to spend $4 billion on the development of autonomous vehicle technology. "The evolution of computing power and IT have helped bring great products to customers – from cars to tablets," had said Ford CEO Jim Hackett.

"We can now harness this technology to unlock a new world of vehicle personalization, supply chain choreography and inventory leanness that rivals any industrial model in the world," had concluded the executive.